A Sierra Leonean businessman, identified as Ousman Darboe has died in Serrekunda – The Gambia, after he was released on bail by The Gambian Police following his arrest and detention for suspected possession of stolen property. 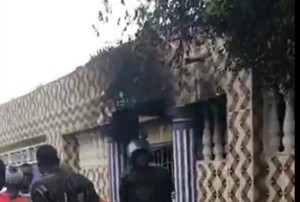 According to The Gambian News Network – Kerr Fatou, dozens of young people gathered at the Serrekunda Police Station to protest against the death of Ousman Darboe, who they claimed was severely beaten by the police anti-crime unit.

Darboe, a shop owner at the Black Market was reportedly arrested by the police anti-crime unit about 13 days ago and released last Friday.

On Tuesday, he was reportedly called back to the anti-crime unit in Bijilo and while there, his friends received a call from him that he was not feeling well.

Darboe’s friend who identified himself as Muhammed, told Kerr Fatou News that Darboe is an asthma patient.

When Muhammed and his friends got to him, he was already suffering and they took him to Medicare Clinic in Brububi.

He passed away on Tuesday at 9: 30 according to Muhammed. His friends from the Black Market gathered at the police station near the Serrekunda market demanding justice for Darboe.

They claimed he was tortured and kept in police custody for 9 days without charge.

Muhammed told Kerr Fatou that the accusation against Ousman who owns a store at the Black Market was that he bought stolen goods from someone.

Ousman has been in the Gambia for 20 years, and now leaves behind two young children and his Gambian wife, said Muhammed.

His remains are currently at the Serrekunda Hospital mortuary.

Meanwhile, an angry mob has burnt down the compound of Gorgi Mboob – commander of the anti-crime unit, for the alleged role of his officers in the killing of Darboe.

Prior to the incident, the police had issued a press release “calling on the youth to observe calm and restraint”.

They claimed Darboe’s name “came up during investigations into a Breaking and Stealing incident that occurred at Kerr Serign on 14th July 2019”.

“Suspects in the said case confessed selling items stolen from the Kerr Serign incident to Ousman Darboe,” said the police.

“Investigators visited his shop at Serrekunda market where a Flat Screen television, part of the stolen items was recovered in his possession.”

According to the police, Darboe was arrested on 12th July and charged with receiving stolen properties contrary to the laws of the Gambia.

Then on Monday the 15th of July, he was granted bail but he kept on reporting on bail.

The police confirmed that Darboe during his detention was said to be an Asthma patient as shown by medical papers tendered by his family which prompted his bail.

“The Inspector General’s Office assures the public that it will continue a probe into the death of Ousman Darboe and the outcome will be duly communicated to ascertain the cause of death,” said a statement from the police.

This is the second incident of death allegedly caused by Gambian police in less than a month. About two months ago, a University student call Kebba Secka was allegedly stabbed to death by a police officer who is currently charged with murder.

In Sierra Leone there are calls for President Bio and his wife Fatima Bio who is also a Gambia national to press on the Gambian government to ascertain the cause of death of the Sierra Leonean national, so that justice can be expedited.