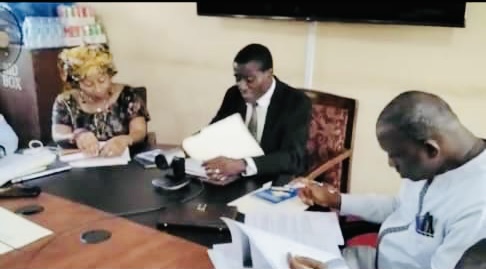 Negotiations commenced on the 5th May, 2022 between the Sierra Leone Teachers Union, the umbrella body advocating for the welfare of teachers across the country with the Teaching Service Trade Group Negotiating Council on burning issues affecting effective delivery of teachers in the classrooms.

The negotiation, which is ongoing, with the relevant Government authorities like the Ministry of Basic and Senior Secondary Education, Teaching Service Commission (TSC), and the Ministry of Finance borders on increase in salaries , improved conditions of service, payment of school subsidies, recruitment, replacement, promotion and re-assessment.

It could be recalled that after the launch of the Free Quality Education programme by President Julius Maada Bio in August 2018, a delegation from the Sierra Leone Teachers Union headed by Alhaji Mohamed Salliue Bangura immediately paid a visit where they commended the Government on its victory and the role teachers should play  in actualizing the Free Quality Education  flagship programme. High expectations regarding improved conditions of service for teachers was top on the agenda.

Responding, President Julius Maada Bio expressed delight to meet with the Executive of the Teachers’ Union and noted the great strides they are making in building an informed and intellectual society, while stating that as a Government they are aware of the concerns of teachers and assured that they will strive to improve their welfare.

However, with the current rate of inflation, the Union continues to engage the Government for better conditions of service as the high cost of living makes salaries less meaningful.

A teacher in the east end of the city expressed the view that his salary is a mere pittance when compared to those paid to other public sector workers.

However, now that negotiation has commenced there are positive signs that some of the demands by the Sierra Leone Teachers Union will be met very soon.

Apart from advocating for the welfare of teachers, the Union empowers its members through workshops or in-service training, provide emergency relief packages during disasters; help those that are seriously sick with funds and bereavement package.

The Union works with Government and other bodies on school related issues and many see the need for teachers to speak with one voice so as to actualize these goals rather than via splinter groups.

With high expectations from the teachers, it is expected that at the end of the engagement Government will come up with a package that will be appreciable by teachers nationwide.