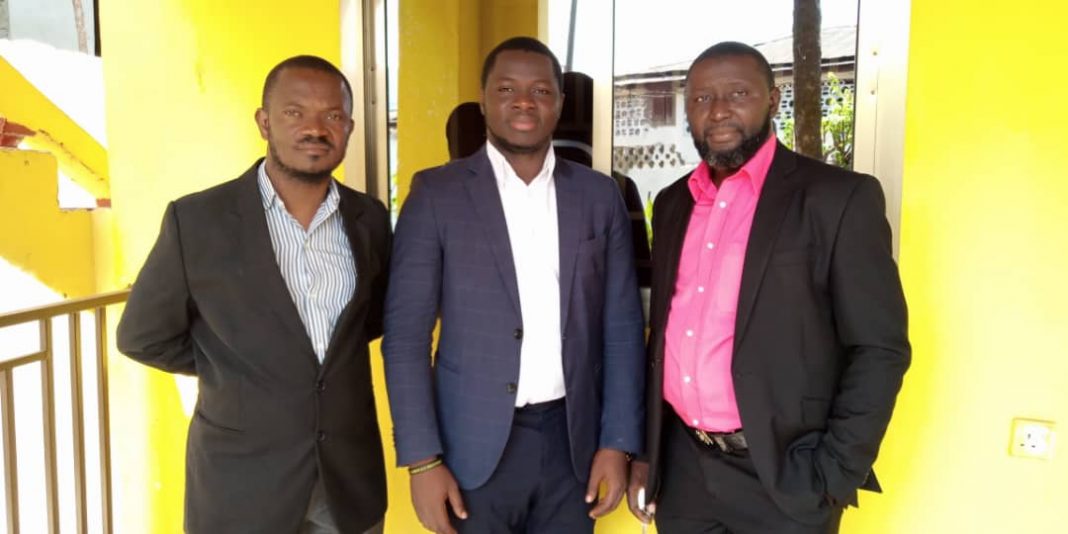 In the bid to enhance the promotion of democracy and good governance, the Consortium for Good Governance, Human Rights and Democracy, referred to as (CGHRD SL)  comprising certain Civil Society Organizations  with  key focus on Good Governance, Human Rights, Democracy, Rule of Law, Social Justice, Transparency and Accountability has on Thursday 14th November, 2019 in a joint press release condemned the unlawful arrest, manhandling  and detention of  the  Managing Editor (Salieu Tejan Jalloh) of the Times SL  by joint Security personnel led by the Sierra Leone Police at his Soldier Street office, on Monday, 11th November, 2019 at about  7:40 pm at the  alleged orders of the Chief Minister, Prof. David Francis.

The released noted that, as civil society organizations,  CGHRD holds the view that the promotion of democracy and good governance is mind boggling, and if freedom of the Press is gagged, the liberty of the individual is undermined and freedom of speech is compromised, adding that by virtue of their mandate, it is their duty to advocate against developments that can negatively affect citizens.

The release noted that according to sources, the arrest was accompanied by physical assault and intimidation on his person, before been dragged to the headquarters of the Central Investigations Department ,detained and later released on bail as a result of health conditions, noting that the arrest and detention of the renowned journalist was precipitated by a text sent by him to the Chief Minister seeking clarification over an alleged transfer of a whopping sum of $ 1.5 M into the Chief Minister’s private account at ECOBANK on diverse installment.

Against this backdrop, CGHRD categorically and unequivocally condemned the orders of the Chief Minister and the actions of the Police as preposterous and politically motivated  harassment, adding that thereby unreservedly negating the President avowals and his Government’s commitment to uphold the principles of democracy, good governance, human rights and press freedom, adding that the arrest and detention of the said journalist is an additional attack on media freedom in relation to the series of violations already committed against journalists, the opposition and the citizenry in recent times.

“Incontrovertibly, subjecting a journalist into detention for merely seeking clarification from a public official on an issue that can generate public interest is unacceptable and unlawful. And if measures are not put in place, the obnoxiously machinated action will not only  damage the image of the country but will  undermine the willingness and ability of the Government to adhere to its commitment towards international human rights obligations, protection of the right to freedom of opinion and expression. It undermines the fight against corruption, transparency and accountability”.

CGHRD noted that with regards media publications, the IMC and SLAJ Codes of Ethics, and international best practice demand that a journalist is expected to make clarification or cross check his information; so as to hear the other side, noting that undisputedly, the Managing Editor was on point in showcasing his professionalism as a sober minded media practitioner before his surreptitious incarceration.

The release said that in view of the aforesaid, and in conformity with  Chapter Three of the 1991 Sierra Leone Constitution, the principle of protection against arbitrariness, human rights and justice, right to freedom of expression and opinion, right to access information and public accountability are guaranteed.

CGHRD, it contains chose not to justify the alleged transfer of $ 1.5m into the Chief Ministers private account at ECOBANK, for it is a serious allegation that is subject to investigation to ascertain its veracity.  But however, they are deeply concerned about the arbitrary arrest, manhandling and detention of the Managing Editor of the Times S L Newspaper.

On the whole, the Consortium for Good Governance, Human Rights and Democracy in good faith and for sanity, public accountability, conscientiousness and justice demands the following:

“That the Anti-Corruption Commission acts independently, impartially and fairly in the public interest as provided in Section 9 (1) of the ACC Act of 2008. We therefore beseeched the ACC to mount an immediate investigation into the said matter involving the Chief Minister, Prof, David Francis in which it has been alleged that the sum of $ 1.5 M was deposited into his private account at ECOBANK on diverse dates.

That Prof David Francis be discharged of his position as Chief Minister until the investigation of the said matter is completed as in the matter between the Anti-Corruption Commission (ACC) and the President of the Sierra Leone Football Association (SLFA) Isha Johansen (First Accused) and Chris Kamara (Second Accused) in which the ACC Commissioner call for a discharge of the duties of the SLFA President among others.

That the  police refrain themselves  from  the  incessant temptation of being used as political tools by politicians  to intimidate , manhandled  , arrest  and detained  peaceful citizens they  vowed to protect.

That we applaud  Government for  its pronouncements to amend Part 5 of the Seditious Libel Law  of the Public Order Act of 1965, which is still being used to  curtail press freedom in the country.

That the Human Right Commission Sierra Leone (HRCSL) act now on the issue or at least make a comment or press statement.

That the Independent Police Complaint Board (IPCB) to launch an investigation into the alleged police brutality perpetrated against the journalist in question.
Over and above, we call upon the Sierra Leone Media to continue playing their role in informing citizens on issues of public interest affecting them and create platforms where they can share their views on the issue”.