In a bid to improve the capacity of journalists, reporters, DJs and presenters on reporting and providing public education on COVID-19, considered to be important components in the fight, the Media Reform Coordinating Group (MRCG) in collaboration with the SLAJ Corona Response Committee (SLAJ-CRC) and with support from the United Nations Development Programme (UNDP) have on Thursday 4th June, 2020 held a one day training programme for journalists on Covid-19 reporting at the Young Women’s Christian Association Hall on Syke Street in Freetown.

In his statement, Chairman of the Media Reform Coordinating Group (MRCG), Dr. Francis Sowa, disclosed that one of the most important elements needed in the fight against the disease, is effective public information dissemination and public education in order to ensure the public adopts all the recommended health protocols, adding that under the leadership of the Sierra Leone Association of Journalists (SLAJ), they have embarked on major public education and sensitization programmes through radio and television engagements to complement the efforts of the Government.

He said the training is organised by the MRCG in collaboration with the SLAJ Corona Response Committee (SLAJ-CRC) in order to build the capacity of journalists in response to the COVID -19 outbreak in Sierra Leone by improving their understanding to identify, check and debunk fake news on COVID-19 and equip them with guidelines for reporting during emergencies which will complement the communication objectives of the Government, as outlined in the National COVID-19 Communications Strategy underscoring how the role of the media in the fight against and the containment of COVID-19 in Sierra Leone cannot be overemphasized at a moment like this when the country is faced with the virus.

In his presentation on the topic “Understanding, Identifying, Checking and Debunking Fake News on Covid-19”, Director of Media, Alumni & International Relations, University of Sierra Leone, Tonya Musa (PhD) lamented that false information and fake news are the major issues of concern regarding public engagement about mitigating the transmission of COVID 19.

He said that rumours are a second form of misinformation and one popular conspiracy theory exists that the virus was developed as a means to wage a biological war against China.

“In China, a rumour spread that bioweapons research in a Wuhan laboratory resulted in the genetic engineering of COVID-19 that was then released. Such rumours may have even jeopardized the working relationship between Western scientists and their Chinese counterparts searching for a COVID-19 vaccine,” he asserted.

He said that UNESCO also observes as follows: “Unreliable and false information is spreading around the world to such an extent that some commentators are now referring to the new avalanche of misinformation that’s accompanied the COVID-19 pandemic as a ‘disinfodemic’.”

In underscoring how to identify fake news, he said, such comes in different formats; either as written texts or videos, or audio recordings or cartoons or advertorials or other artistic designs. Even some of what is considered today as fake news does not always come by way of straight forward claims, adding that in the current crisis due to the COVID-19 pandemic, media workers are as vital as other essential professionals and that many factors are transforming the communications landscape, raising questions about the quality, impact and credibility of journalism.

He said that the code also ensures that journalists adhere to the highest ethical standards, professional competence and good behaviour in performing their duties and the Code provides guide to professional media practice, and it is therefore applicable to those practicing journalism in Sierra Leone.

Underscoring the code of ethics, he noted, that Article 1 talks about Freedom And Responsibility of which journalists shall at all times strive to uphold and defend the rights of freedom of expression and information, the principle of media freedom and responsibility, and the right of the public to be informed.

He also said Article 2 talks about the Respect for National Values, Public Interest and Social Responsibility of which he stated that Journalists shall help to promote national unity, the universal principles of human rights, democracy, justice, equity, and peace.

Supporting or encouraging violence, incitement or hatred, against religious or ethnic minorities and social exclusion, including persons with disabilities must be discouraged.

He concluded by noting that journalists should ensure that they uphold the code and ethics of the Association in the cause of practicing their duties as media practitioners.

Giving the closing remarks, UNDP’s Head of Communications, Hassan Jalloh, expressed appreciation to the Media Reform Coordinating Group (MRCG) and the SLAJ Corona Response Committee (SLAJ-CRC) for making the training a success, which he considered as very important in the fight against Covid-19 in the country.

He noted that Media Practitioners are stakeholders in curtailing the spread of the Covid-19 in the country, adding that UNDP feels honored to support the initiative underscoring how they are very committed to support any venture geared towards equipping journalists on Covid-19 reporting. 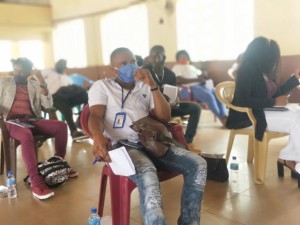