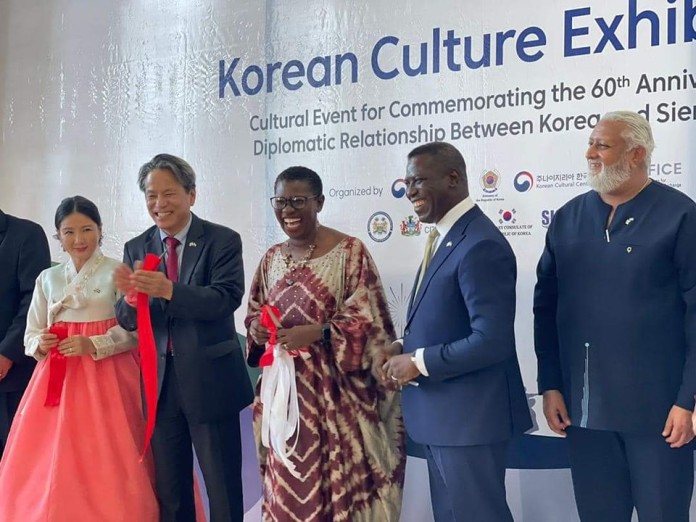 A week-long activity marking the 60th Anniversary of the Korean – Sierra Leone diplomatic ties was officially opened by the Korean Embassy in close collaboration with the Government of Sierra Leone and the Freetown City Council.

Events of the celebration will run to Friday 2 December with colorful programs such as public policy seminar and Korean film screening. Particularly, the famous Korean group, LEENALCHI band, will visit Freetown to hold a joint cultural performance with the Sierra Leone Jazz Team which is expected to serve as an opportunity to showcase the cultural diversity of the two countries.

The two countries have built friendly relations over the last 60 years, by helping each other in time of need and working together on the international arena such as the United Nations and the African Union. The two countries leaders, President Yoon and President Bio,are expected to exchange good will messages to each other and to the peoples of both countries.

The symbol of deepening relations is the reconstruction of Freetown City Hall, and the Korean Government will further deepen its development cooperation with Sierra Leone in the coming years. The President of KOICA, the major Korean Government development agency, will sign an MOU with the Minister of Planning and Economic Development, during the 60th anniversary celebration week, which will be another meaningful milestone in the bilateral relations.

Against this backdrop, the Republic of Korea cultural exhibition was officially opened on Monday 28th November 2022 at the New Freetown City Council Ground Floor, an event that marked the celebrations of 60th anniversary of Korea-Sierra Leone diplomatic relationship, which has brought so many benefits and opportunities.

He praised the construction of the new City Council Building, which is a symbol of a good relationship between the two countries and went on to thank the Government of Sierra Leone for supporting the 60th anniversary events. The Ambassador commended the newly appointed Republic of Korean Consul in Sierra Leone, His Excellency Mahesh Nandwani for mobilizing his family and team to support the celebrations, and went on to commend his Korean Team for helping the process. Ambassador Kim commended LG Electronics Company for coming to Sierra Leone to showcase its items. He pledged his country’s further commitment in strengthening the bilateral ties.

The Mayor of Freetown, Yvonne Aki-Sawyarr said celebrating trade and cultural opportunities is an excellent idea, which demonstrates a true relationship between the two countries and added that the construction of the City Council Building is a power of partnership between the sister countries. She praised the Korean Republic for growing from a developing nation to an industrialized country. “This is an opportunity for a more industrial relationship and I look forward to stronger ties,” she said.

Sierra Leone’s Foreign Minister, Professor David Francis congratulated the Government and People of Korea for maintaining a strong relationship with Sierra Leone, which started on 25th June 1962. “The relationship has gravitated to a very strong tie with an unbroken record in a very challenging competition amongst states,” the Minister said and continued that the New City Council Building is a shining example of the good relationship. “We have so Sierra Leoneans that have studied in Korea and the two countries have shared so many opportunities,” the Minister remarked and furthered that the Korean private sector is key in taking forward a stronger partnership in the next sixty years. “We are now moving to economic diplomacy that will help Sierra Leone grow to an industrialized country,” he said and revealed that there will be a 20% increase of Korean Private Sector investment in Sierra Leone in the coming years. “No country has ever developed through aid. We now want to focus on trade and investment,” Prof. Francis said and went on to appeal to Korean Private Sector Investors to support the process. He praised the newly appointed Korean Consul, Mahesh Nandwani for taking the lead in facilitating the process. “We look forward to celebrating a very strong relationship in the next sixty years,” he noted.

Present at the occasion was the Minister of Trade, some Government and private sector officials, Korean Officials and invited dignitaries.