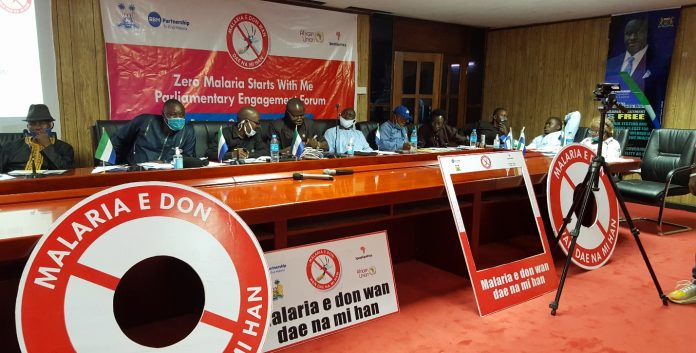 Dr. Alhaji S. Turay, who happens to be  the Assistant Programme Manager of the National Malaria Control Programme (NMCP), has disclosed that Port Loko District has the highest malaria prevalence in Sierra Leone while Western Area Urban has the lowest with 6%.

He made this disclosure on the 21st October, 2020 during the Zero Malaria Parliamentary Engagement Forum organized by Speak Up Africa at the Committee Room No. 1 of the House of Parliament in Freetown.

Dr. Turay furthered that Malaria prevalence in Sierra Leone is 40% and that its prevalence in the Northern Region is very high due to the lack of the use of insecticides, treated bed net as compared to the South and Eastern Regions.

He added that the breeding grounds for mosquitos are going away in western area.

According to Dr. Turay, the mobility for all ages is 38% and malaria account for 37.8% in all hospitals. Mobility for Under-Five children is 38.3% and that kids are dying because of malaria.

“The number of deaths is gradually reducing but to be honest with you we are still not certified. Yearly we have 1.7 million cases of malaria and 1.95 Thousand deaths,” he referenced.

He commended the move taken by the government and its partners such as the distribution of treated bed nets, the free testing and treatment of malaria among others.

Chairman Parliamentary Health Committee, Hon. Moses Biamba Jorkie in his opening remarks and welcome address pointed out that Malaria is a great burden of which everybody is at risk.

In making sure that by 2030 Sierra Leone get rid of malaria, it is incumbent for all honourable members to go to their constituencies in order to add their voice to the campaign as Malaria is one of the deadliest diseases in Africa, he maintained.

Speak Up Africa, Malaria Program Officer, James Wallen said Zero Malaria Starts with the ‘me campaign’ which is a pan African Movement that aims to build the energy and commitment from all sectors in society necessary to achieve malaria elimination by 2030.

He added the campaign was launched by RBM partnership to end malaria and the Africa Union at the 54th African Union Summit in July 2018 and was endorsed by all 55 Heads of State of the AU.