Residents of Port Loko District were on the 8th October 2020 in high spirits and jubilant moods as well as full of praises for the SLPP Led Government as President Julius Maada Bio officially opened the Dr. Kadie A. Sesay Secondary School for Girls a spectacular event that was witnessed by various personalities from different walks of life.

The Girls Secondary School which was solely funded by the Mercury International Betting Company is named after one time Linguistics Lecturer at Fourah Bay College and former running-mate to President Bio in the 2012 Presidential election which the SLPP lost to the APC party.

The construction of the school was part of President Bio’s 2018 election campaign promise to the people of Port Loko District and falls under the churning out of the Free Quality Education. That promise crystalized out of the objectives of combating early marriage, teenage pregnancy and to also promote girl child education.

President Julius Maada Bio in his address thanked Mercury International and Martin Michael in particular saying his singular act demonstrates in deed the spirit and letter of a powerfully evocative line of the third verse of our national anthem: “so too may we show forth the good that is ever in thee.”

He said there is inherent good in Sierra Leoneans who associate with a clear leadership vision that prioritises education and especially the education of the girl child.

“Education is the single most potent enabler that has developed nations and transformed lives. Thank you again, Mercury, and thank you, Mr. Martin Michael,” he maintained and expressed gratitude.

“Giving every girl, including pregnant girls, access to free quality school education; reinforcing positive role models for girls; and creating the enabling environment for every girl to succeed and be all she can be, is above politics,” he anchored.

He said they believe, as a Government, that they must maximise the multiplier effects of investing in the education of girls.

“That belief aligns with our Medium Term National Development Plan, the Sustainable Development Goals 4 and 5, and other international human capital development agenda,” he highlighted adding that the event is about ensuring that girls, irrespective of ethnicity and place of origin, are empowered to contribute their fair share to the development of this nation.

“So, coming three days before the International Day of the Girl Child on 11 October 2020, this opening and naming of this school the Kadie A Sesay Secondary School is most auspicious,” the President intimated.

In his statement during the well-attended event, the Managing Director of Mercury International ,Martin Michael, started by recognizing the real heroes and champions of the project – the Minister of Basic and Senior Secondary Education, Dr. David Sengeh, the Delivery team headed by Grace together with Mariama, Eman, Haja Isata Kamara, Resident Minister North West, the Consultants- Ideas Limited, the Contractors, Kolville Engineering, the Management and Staff, the retailers and customers of Mercury International.

He intimated that the school is their project highlighting how their enthusiasm, passion and the way they owned the project made it a pleasure for him to be a tiny part of what has been achieved.

The Managing Director said it is their success, their story and history. He thanked them on behalf of the owners and Directors of Mercury International for being part of the success.

“To the Mercury staff both from the managers to the cleaners and retailers- the biggest compliment I can pay you is that you are Mercury and Mercury is you. Today is a testament to your success. Be proud to say you built a school at Port Loko,” Martin expressed gratitude.

He congratulated the Resident Minister, Haja Isata Kamara, for visiting the project site twice a day.

“Your infectious personality, energy and love for your people ensured that Port Loko got the best of the best, and the girls who attend this school can one day be part of an alumnus that is as prestigious as Annie Walsh, Convent, Harford or QRS,” he commended her.

The Mercury International MD stated that after the appointment of Dr. David Moinina Sengeh as Minister of Basic Education asked Dawn a colleague of his to set up a meeting with the Minister as the school project had stalled.

“I said to her that I was not really sure what to expect as after all it is not always you get to meet a world-famous innovator, a rising superstar given so much responsibility, a young man with so much brains and ability and above all, a friend of Bill Gates. I was concerned that I would basically be meeting an intellectual know-it-all,” he disclosed but said after their first meeting in November 2019, he was finally convinced that the project would come to fruition and that the school will be built.

He pointed out that collaborating with the Minister over the past few months has been an absolute pleasure saying he looks forward to continuing the collaboration in getting the other projects completed.

Martin apologized to President Bio for the absence of two of their Directors and Shareholders, Max Brandwain and Hassan Saad whom, he said, due to COVID-19 travel restrictions are currently unable to travel to Freetown.

Making a special mention of both of them and their Chairman, Samir Hassanyeh, who was present he said their support had been unwavering, unrelenting and without that support they would not have been able to fulfil their pledge to the nation.

He said they deserve as much praise as anyone else for approving the funding of the school and the other schools yet to be built saying a project of the one that is about to be opened is not built on funding alone.

“Without passion, it becomes a lifeless soul, mere concrete block that will soon be forgotten and ignored or used to plaster advertising materials,” he said logically.

Martin noted that their heroes and champions made sure that such did not happen as they gave the school life and soul and an everlasting one at that.

He said its life and soul have been felt throughout the nation.

“I have had calls from friends and well-wishers who have indicated a desire to help this school,” he revealed.

Bagging a deafening round of applause was when Martin Michael stated that, “Today, I can announce that my friend at Print Point, Samir Hamed, has donated 5,000 specially endorsed exercise books. I have 1,000 copies with me now…well, actually 999 as I took one for myself… The remaining 4,000 will be printed and supplied after the school has decided on its badge and motto.

Further, the staff at Mercury International have come together and purchased 350 face masks and 200 school bags which they have donated to the school. In addition, I have asked that we acquire the school’s bank account number to ensure that the sum of Le 10,000,000 (Ten Million Leones) a month is deducted from my salary at Mercury and paid directly to the account of the school. This is a one-year commitment to assist the school in its formative year.”

He said since its inception in 2006, Mercury International has been synonymous with responsible corporate social responsibility that has delivered on its developmental commitments.

Martin said from the football, cricket and volleyball playing fields to the wrestling mats; from the surgeon’s table in Freetown, Senegal, Accra and Delhi to classrooms across the country; from scholarships to annual donations to the Ballanta Academy of Music, Milton Margai School for the Blind and the National School for the Deaf and to the Home for the Aged, Mercury International has extended its philanthropy to give back to society and contribute meaningfully.

The Managing Director maintained that, however, they felt that notwithstanding all that they have been doing, they were missing out on leaving a tangible and concrete legacy for the company and the people of this beloved country.

He disclosed how the flagship programme of Free Quality Education of the Government of His Excellency President Julius Maada Bio gave them that opportunity.

“We knew as individuals and as a company that there was a need for new schools and classrooms,” he stated furthering that since education is now free, they utilized the funds they had allocated to a project that would create a lasting legacy for Mercury but, way more importantly, a project that would create an opportunity for children – particularly girls – to have the best education possible in the best available classrooms and school.

The pragmatic Managing Director said they will seek President Bio’s consent to detach themselves from the President’s convoy and make a detour by taking a left at the roundabout at Mile 47 and head towards Moyamba Junction.

He revealed that upon arrival at Moyamba Junction, they shall offload their tents and equipment and set up camp to start work on constructing the first of its kind Early Childhood Development school in Sierra Leone. “We look forward to you opening that school in January 2021,” he requested. 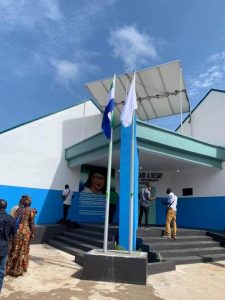 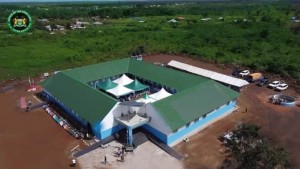 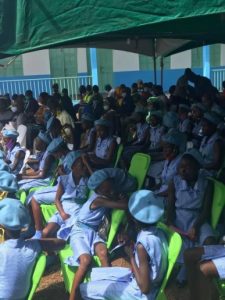