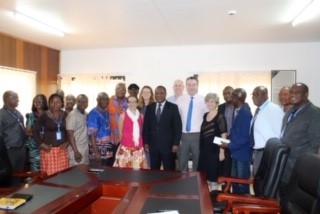 The Minister of Planning and Economic Development, Dr. Francis Kai-Kai on Thursday February 6th 2020 held talks with a high powered delegation from the Office of National Statistics (ONS) UK at his Tower Hill Office in Freetown. This engagement brought an end to the delegation’s four day working visit to Sierra Leone.

In introducing the ONS team, Prof Osman Sankoh (Mallam 0), Statistician General and CEO of Stats SL said that the team had come as a result of his unfettered engagement with the UK National Statistics Office on the need for collaboration. He disclosed that discussions had been on for over a year to pull off and establish this partnership and that he is pleased that the team finally was able to come to Sierra Leone to do an assessment of Sierra Leone’s National Statistics Office which is Stats SL. He furthered that the relationship around the visit has been an affable one and that Stats SL hopes to benefit a lot from this visit especially in terms of the required technical expertise needed to do its work.

The ONS UK team comprising Dr Craig McLaren, Emily Poskett and Mike Prestwood, informed the Minister of how insightful and informative their visit has been. They stressed that the purpose of their visit was to get first-hand knowledge on Stats SL priorities, challenges and future plans for the coming years and identify how the UK Office of National Statistics’ collaboration can fit in .The delegation revealed that the four day visit has indeed helped them understand the difficulties faced in generating official and credible statistics by the State’s official statistics body, which they say was quite enlightening and that the visit has made them understand most of the challenges  faced by Stats SL .They lauded the leadership and staff of Stats SL that they interacted with as being top notch, experienced and very qualified to do the job.

In response, the Minister of Planning and Economic Development, Dr Francis Kai-Kai expressed  satisfaction at the assessment visit by the UK Office of National Statistics which he says is a demonstration of the UK Government’s commitment to strengthening institutions in Sierra Leone. He continued that this couldn’t have come at a better time and thanked the office for thinking about Stats SL as an institution worth supporting.

He assured them of his Government’s reliance and dependability on official statistics which he says was even the guiding principle in the Mid Term National Development Plan which was developed by his Ministry on behalf of the Government of Sierra Leone. He said that there is no way the Government of Sierra Leone can function without data which he says is the only tool that guides Government policies and programmes that it implements.  In conclusion, he thanked the team and said he looks forward to the establishment of an ever growing bond between the two National Statistics Offices.

During their four day visit in Sierra Leone, the ONS team from UK held talks with the Management of Stats SL to understand the work of the institution and possibly identify means of collaboration and also visited the southern regional city of Bo, where they held a stakeholder engagement meeting with Stats SL regional staff, partners and other MDAs.