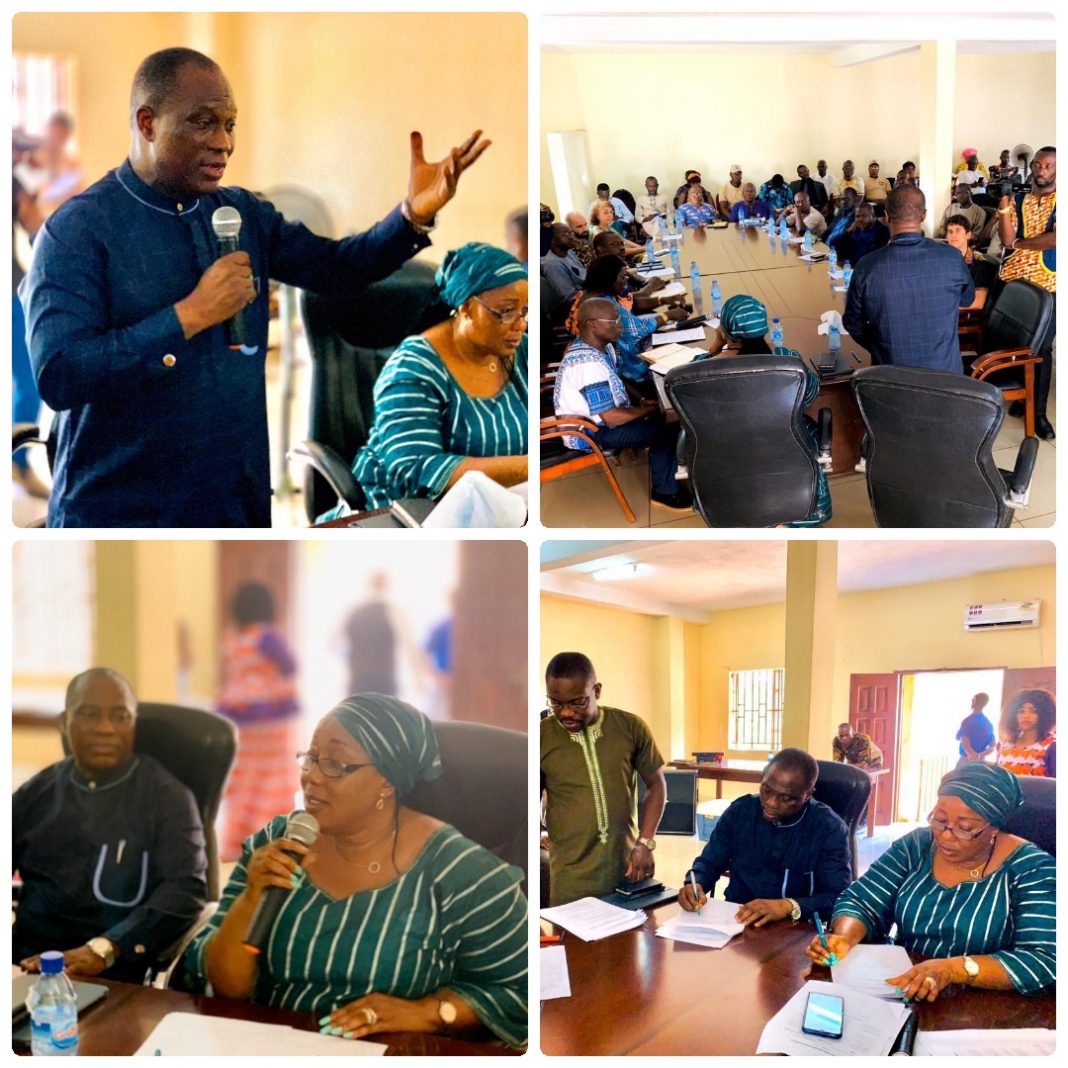 Minister of Planning and Economic Development, Dr. Francis Kai-Kai, has said the government of President Julius Maada Bio is focused on making sure this year of delivery becomes the most important thing in Sierra Leone’s development and that NGOs are considered critical actors in the actualization of the President’s Agenda.

He made this statement, as twenty-eight (28) more NGOs signed the Service Level Agreement (SLA) with the Ministry of Social Welfare. Already, two batches of NGOs serving in the Health and Education sectors have signed the SLA.

Dr. Kai-Kai opened his remarks with acknowledgement of the contributions of NGOs to Sierra Leone’s development prior to, during and even after the civil war. He noted that the government strongly relies on NGOs in taking development to the last mile within the country. He said the government was committed to leaving no one behind, as demanded by the MTNDP (2019-2023) and also the Sustainable Development Goals (2030).

Dr. Kai-Kai noted the importance of monitoring and evaluation processes in the implementation of development projects; emphasizing the need for NGOs to effectively collaborate with Local Councils, especially in the area of reporting their activities to the Councils. He said the Ministry was at an advanced stage in establishing District Coordination Committees (DCC) to address development issues in the districts.

In her statement, the Minister of Social Welfare, Baindu Dassama, noted the significance of the signing, in the road to deliver effective social services to the people of Sierra Leone. She said the NGOs should continue working with community stakeholders in the formulation and implementation of programs, which would ensure ownership and sustainability.

Minister Dassama encouraged the NGOs to always provide line Ministries with feedback on challenges encountered during the implementation of projects. She also urged the NGOs to deliver on their projects.

Chad McCordic, Program Director, Community Led Development Program, delivering the vote of thanks on behalf of NGOs said they would be fully committed to the President’s agenda of delivering urgent results in 2020, working in key areas of the development sectors.

Other dignitaries in attendance included: The Deputy Minister of Social Welfare, The National NGO Coordinator, Eric Mansallay, The Compliance and Partnership Coordinator, Ansumana Konneh among others. Among those that signed include: Defence for Children Sierra Leone, TROCAIRE, Save the Children, Talking Drum Studio, One Village Partners, Home Leone.

In a related engagement, the Ministry of Planning and Economic Development on Thursday 27th February 2020 in Freetown conducted the signing of Service Level Agreement (SLA) between the Ministry of Basic and Senior Secondary Education (MBSSE) and ten (10) NGO’s.

The signing ceremony, which took place at the MBSSE conference room, was geared to ensure that the NGOs provide a defined set of services within the educational sector.

The Deputy Minister of Planning and Economic Development, Dr. Robert Chakanda, who recognized the invaluable role NGOs play in meeting the aspiration of Government; noted that NGOs were considered as critical actors in the actualization of the Medium Term National Development (MTNDP 2019-2023).

“When NGOs align their plans with the MTNDP, it will be very easy to promote effective service delivery and discourage duplication of function. The President Bio-Led administration will ensure that NGOs work within the specifications set by the line Ministries to ensure that at least 70 percent of the funds for a particular project is used for direct implementation”, he said.

Dr. Chakanda implored NGOs to continue the good work and encouraging them to always attend coordination meetings at both national and district level.

In his address, the Minister of Basic and Senior Secondary Education, Dr. David Moinina Sengeh thanked the Ministry of Planning for championing the process of delivering the SLA’s; stressing the need for a singular vision in addressing the several challenges within the education sector. He emphasized on accountability and transparency to the citizens in the delivery of targets and plans.

Dr. Sengeh noted the importance of collaborating with NGOs in strengthening systems and providing efficient data analytics for effective service delivery. He urged the NGOs to support government institutions to jointly monitor progress of project implementation within the sector, which according to him, ‘will give an independent assessment and objective view of progress and errors/challenges in the implementation’.

Delivering the vote of thanks, the Head of Catholic Relief Services (CRS), Paul Emes, while thanking everyone for their commitment to making the event happen, described the signing as an important moment in promoting service delivery in the education sector; noting that NGOs would continue to work in the interest of developing the various sectors within the governance structure of the country.