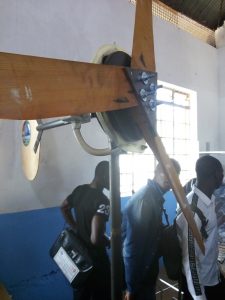 In a feat of making further accomplishments, the Milton Margai College of Education and Technology (MMCE&T) polytechnic has got a new program. The Acting Principal, Dr. Philip John Kanu on Thursday 18th April 2019 commissioned the renewable energy program at the Congo Cross campus of the polytechnic at which ceremony he asserted that his three main priorities for the college are to return the college to its former glory when its products were very marketable by introducing quality teaching and learning, infrastructural development in all the three campuses of the polytechnic and transform the college to a technical university.
The donate equipments for the renewable energy program include 25 computers, over 1,000 solar panels for practical, wind turbines, 19 multi-meters, solar water heaters and a bicycle that plays music for exercise.
A public lecture was also delivered by Abu Bakarr Bah, a renowned engineer from the United Kingdom, who has worked both in Sierra Leone and the UK.
Dr. Kanu added that the event is very important, that the college would venture into new areas, that his interaction with people over the years resulted to the donation of the equipments by the organization, Bintumani D-SL German–Sierra Leone Society and pledged to be inviting various renowned professionals to deliver public lectures at the college to motivate students, continued that the public lecture would form part of the examination of students stressing that he does not intend to hold on to his position forever and entreated students that the Congo Cross campus is special and close to his heart.
Dr. Kanu also encouraged students to study hard, be responsible underscoring that most of the developments taking place in the college is for them and warned them not to misuse the facilities and bus that would soon be provided for them nor allow people to instigate them to engage in violence or other social vices.
Abu Bakarr Bah, a renowned engineer from the United Kingdom, who has worked in Sierra Leone and the UK, in his public lecture, dilated on health and safety awareness, competencies required for different tasks, hazards and risks in the construction industry, how to prevent accidents asserting that 75% of the laws in the UK are applicable in Sierra Leone although they are not enforced.
He also talked about the Sierra Leone Factories Act 1974, construction design and management, regulations and guidance reiterating that in the UK it is mandatory for a Health and Safety Policy for all construction companies, that it is compulsory for the employer to provide the resources, first aid, emergency procedures, address noise vibration, security, storage, electricity, provide Personal Protective Equipments (PPEs), fire extinguishers, communication as well as address dusts and fumes, movement of vehicles and working from heights, two of the most high risk operations in the industry.
Earlier in his welcome statement, the college’s Registrar, Mr. Sherifu Bangura, who chaired the event, stated that the occasion is a transformation in the history of the college while the Dean of the Faculty of Engineering observed that the day is remarkable in the history and transforming of the college to a technical university enlightening that the laboratory is the first of its kind nationwide for which he is very delighted for the sponsors and hoped other well-wishers would emulate their sterling example.
The Dean of the Congo Cross campus, engineer Ngabai disclosed that the renewable energy laboratory is the number one in the country and that even institutions offering renewable energy courses do not have such a facility recalling that the same organization had earlier in 2006 donated some computers to the college and affirmed that Milton Margai College is moving ahead of other institutions.
The Vice Principal, Dr. M.A. Jalloh pointed out that the commissioning of the renewable energy program is another milestone in the annals of the college, a revolution and highlighted the remarkable achievements of the Acting Principal in just a year underscoring that he is poised to make the college great again and second to none and encouraged all to go along with the development train.
Dr. Wilfred Gibson, Physics and Mathematics graduate, Dr. Suliaman Sow, Food Security and Post-Harvest Specialist, Abu Kamara, Monitoring and Evaluation Officer all from the Scaling–Up Nutrition Secretariat in the Office of the Vice President, staff, lecturers and students also attended the event.
The vote of thanks was rendered by Ibrahim Turay, the Federal President, while the conducted tour of the renewable energy laboratory climaxed the event.
The public lecture will be uploaded on the college’s website.