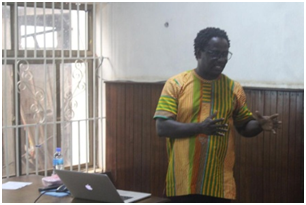 With the objective of reviewing and finalizing the draft Policy on Safety of Journalists in Sierra Leone the Media Reform Coordinating Group (MRCG) on Friday 26 August 2022 organized a workshop at the Negus Nagas Complex at Grafton village, Western Rural District.

The workshop, which was funded by the National Endowment for Democracy (NED) in the United States of America brought together heads of national journalists’ associations and organizations.

Speaking at the event, the National Coordinator, MRCG, Dr. Francis Sowa, noted that the workshop was part of continued efforts by MRCG and its stakeholders to create a convenient environment for journalists and media practitioners in their lines of duties. He added that the MRCG had engaged Government and stakeholders and had conducted numerous stakeholders’ meetings.

He continued that “our business here today is to look at a draft policy which has been developed for the safety of journalists in Sierra Leone and to make necessary corrections and adopt it. The final version will be adopted and used as a template by media houses to have their individual policies to guide and secure their journalists.”

The President of the Sierra Leone Association of Journalists (SLAJ), Ahmed Sahid Nasralla, stated that meetings of such caliber are very necessary as the country was fast approaching the general elections; the period in which journalists are more faced with safety and security issues.
He added that engaging the Government on media and safety issues is as important as anything and has the tendency to improve the media landscape in Sierra Leone. “This workshop is a continued effort from the signing of the MoU between the security sector and the media and we will continue to have these kinds of engagements to strengthen journalists’ safety,” said SLAJ President, Ahmed Sahid Nasralla.

The workshop ended with the stakeholders making inputs to the draft Policy, which they adopted at the end of the session. 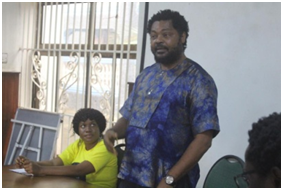