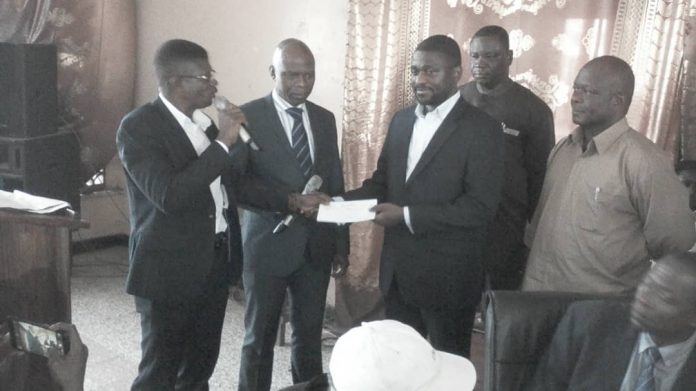 It has gone down well with many football fans that finally the national Premier League will soon recommence after it ceased for a very long period of time because of the acrimonious wrangling in the Association, which brought it to a standstill to the annoyance of many. Sierra Leoneans. This situation paved the way for greater interest in foreign leagues, especially the English Premier League, with some supporting Manchester United, Arsenal, Manchester City, Chelsea, etc.
Our own favourite teams of the likes of Lions, Blackpool, Edwards, Republicans, etc, went into coma.
The newly constituted Sierra Leone Premier League Board, on Saturday 19th January 2019, met with the members of the SLFA Referees Committee together with the Ag. President of SLFA and the Ag. Secretary General of SLFA at the Football Academy, Kingtom in Freetown to establish a fine working relationship between the PLB and the SLFA Referees Committee to ensure an effective, efficient and a problem free 2018-2019 league season.

Emmanuel Saffa Abdulai, Chairman of the PLB, welcomed everyone to the meeting and thanked them for coming. He informed the gathering that the meeting is to iron out outstanding issues for the start of the Premier League. He admonished Referees to uphold the integrity of the game as they are pivotal to a successful premier league. He also asked that the necessary disciplinary action be taken when officials fall short as a high level of professionalism is required.

After fruitful deliberations on a range of issues surrounding the role of the Referees in the country’s top tier league, the meeting agreed on the following resolutions:
The Premier League Board, SLFA and Referees Committee shall uphold the integrity of matches and match officials by ensuring the principle of independence of match officials before, during and immediately after every premier league match is maintained.

Secondly, there will be a one day seminar for match officials (Referees, Asst. Referees, Fourth Officials and Match Commissioners) designated for the 2018-2019 premier league season scheduled for Wednesday 23rd January 2019 at the SLFA Academy, Kingtom in Freetown.

Also, all matches shall be played in accordance with the Laws of the Game in force and as laid down by the International Football Association Board of FIFA-IFAB

It was also agreed that the match officials designated for the forthcoming league must be those in the recent list of the Sierra Leone Football Association Referees.

Again, the Referees, Asst. Referees and Fourth Officials for each match of the premier league shall be appointed by the SLFA Referees Committee and therefore, the Committee shall take responsibility for any bad officiating or misconduct by any match official that will bring the game into disrepute.

Meanwhile, as a source of motivation to the SLFA Referees Committee on behalf of all match officials for the 2018-2019 league season, the Premier League Board also presented soccer match officiating materials including whistles, brandishing flags for Assistant Referees and match balls which were brought from UK by the Chairman of the PLB, Emmanuel Saffa Abdulai Esq.
The League will start on Sunday 27 January 2019 with Lions locking horns with Mighty Blackpool at the National Stadium.

The Sierra Leone Premier League Board is pleased to inform the general public that Rokel Commercial Bank has made a Le15 million donation to the Board as a support to the 2018-2019 premier league season.

The PLB therefore wishes to extend its profound gratitude to the Management of Rokel Commercial Bank, as every single cent is important in augmenting the re-birth of the Sierra Leone Premier league.

In another development, the Minister of Sports, Ibrahim Yelenkeh, on Tuesday 23rd January 2019, officially handed over a cheque of Le2 billion to the Chairman of the PLB Emmanuel Saffa Abdulai Esq. as government’s contribution to the game. This amount, he stressed, is not part of the Le9 billion allocated to the Sports Ministry in the budget, but a surprise packet from the government acquired through discussions and lobbying with President Bio and the intervention of the Chief Minister. Football, he maintained, is void of all political, tribal and regional considerations and it should stay that way. Receiving the cheque on behalf of the PLB, its Chairman expressed appreciation to the Government for this move and stressed that every single cent of the money will be used for its intended purpose. He however highlighted that the money will not be given to clubs without the agreed reforms arrived at.
He further stressed that the money is not to be squandered but put into good use according to the plans arrived at. This situation is not going to be business as usual; any club that does not comply with the reforms agreed upon will not get its own portion as assigned and if they continue until the season ends, the remaining amount not utilised will be returned to Government coffers.
Gracing the occasion were the Chairman of the Oversight Committee on Sports in Parliament, Hon. Alusine Conteh, Permanent Secretary of the Ministry of Sports, Bai M. Turay, Acting Secretary General of SLFA, Abdul Rahman Swaray, Acting President of SLFA, Brima Mazolla Kamara, Director of Sports, Dr. Kenneth Brima, Chairman Sammah Sesay, the oldest member of the Board.