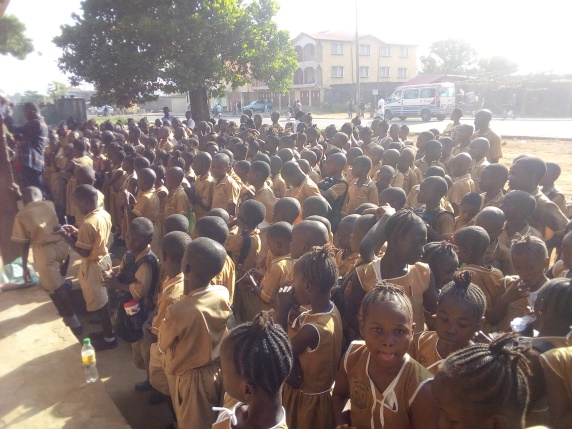 On the 9th November 2020, the National Commission for Democracy (NCD), with support from the Government of Sierra Leone commenced its Community Face to Face Discussions on Government Issues with All Walks of Life in the Western Rural and Urban District at the Rural Education Primary School, Kossoh Town in the Western Rural District.

The NCD Western Area Commissioner, Mr. Benjamin Macfoy commended the school administration for the opportunity to address the pupils and revealed that the Commission would provide a Flag Post and roll-up banner of the National Anthem and National Pledge for pupils and even teachers to be reading them regularly recalling that Civic Education was removed from the school curriculum 30 years ago for unexplained reasons and replaced with Social Studies.

Mr. Benjamin Macfoy also enlightened the pupils that with Civic Education they would respect and uphold the rule of law, appealed to them to treat the National Currency with respect and caution them to stand alert when the National Anthem is being song/played.

The Senior Programs Officer, NCD, Mr. David Williams disclosed that after the Flag Post would have been donated to the school, it would be used to hoist the National Flag during devotion and other functions and appealed to the pupils to respect their teachers, elders, those in authority as well as their colleagues, not to steal, pay taxes when they grow up for Government to undertake development projects and promised that the Commission would visit the school again to talk more to the pupils about Civic Education and their responsibilities and wished them good luck in their ongoing examinations.

The vote of thanks was rendered by one of the pupils who commended the NCD for the initiative and promised that they would be studious and disciplined.

The face to face engagements continue with Commercial Motorbike Riders and in Ayata Bases in the Hastings and other communities.