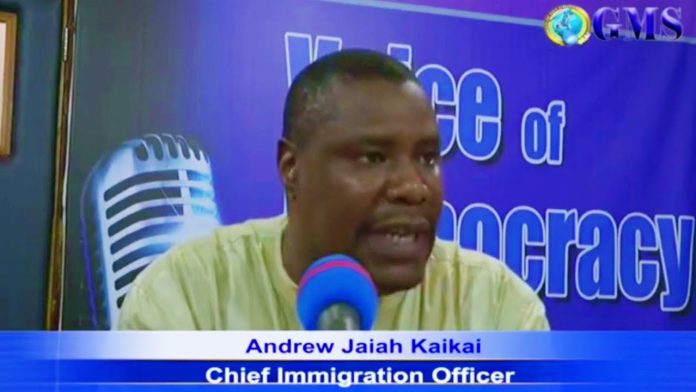 According to the Chief Immigration Officer, Andrew Jai Kai Kai the contract that was signed between the Government of Sierra Leone and Netpage/Thomas De La Rue categorically pegged the price of an ePassport at $100 which at that material time was equivalent to Le750, 000. He noted that the price was stated in dollars and not Leones which invariably mean that whenever the rate of exchange fluctuates it affects the Leone price for a passport. This, he said, is responsible for the slight increase from Le750.000 to Le950.000 and in that respect averred that it is high time for Members of Parliament to revisit the contract and make amendments where it is necessary for such to be made.

Although there is a particular school of thought that is calling for the removal from office of the Chief Immigration Officer and the Minister of Internal Affairs in respect of the current increase in the price of the country’s ePassport and the termination of the Netpage contract simply because of the increase, it is however possible that they are not too knowledgeable about the contents of the contract.

What is really certain is that all the parties acted within the terms of the contract.

Many are aware that the cost of the country’s passport was pegged at US Dollar 100 ($100). Since the signing of the said agreement by the former APC Government that has been the condition. When President Bio took up office, the same procedure was followed. It should be noted that both Netpage and Thomas De la rue are reputable companies with international recognition. The latter has been printing the countrys legal tender for decades without any cause for complain.

The contract entered into by Netpage with the government is to pre-finance the printing of the ePassport which is done by Thomas De la rue and the price was pegged at US$100 per book. When the price of the dollar was stable the cost remained low and even when in 2018, the dollar began to rise, the passports were still sold at Le750, 000 each. However, now that the exchange rate of the dollar has risen and the company has to break-even and not to run at a loss.

It therefore kept to the terms of the contract, which is US$100 per book. Contextually, the Chief Immigration Officer and the Internal Affairs Minister have nothing to do but to conform to the dictates of the contract agreement signed between the company and the Government and ratified by the highest decision making body in the land, the House of Parliament.

The failure of those proponents of the sacking of the CIO and the Minister and termination of the contract agreement are jumbling the facts and misleading the public. Such a contract can only be reviewed and sent to Parliament. To do otherwise is to send the wrong message to investors that our leaders do not respect contracts signed and violate the very law they profess to maintain. This will eventually drive away any serious investor from the country.

It could be recalled that after President Bio assumed office, the issue about the passport surfaced. It was then that various Civil Society Organisations and the media were enlightened about the terms of the said contract; that the cost of the passport was pegged to the dollar (.i.e. US$100). So if the dollar rate has appreciated, it is only plausible that the cost of the passport should also go up, except Parliament reviews the agreement and a consensus reached between the Government and the suppliers. But as it stands, they have done no wrong and are well within the terms of the agreement.