The newly appointed Managing Director of one of the leading financial institutions in Sierra Leone, United Bank for Africa (UBA), Usman Isiaka who took over from Mr. Chinedu Obeta has on Wednesday 14th October, 2020 met with a battery of journalists at New Brookfields Hotel New England Ville in Freetown. 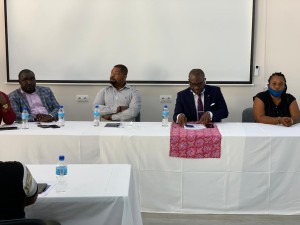 In his address, the Managing Director of United Bank for Africa (UBA), Usman Isiaka said he is happy to be in the midst of journalists as a way of interacting with them and understand the media business in Sierra Leone.

He appreciated the Sierra Leone media for all the support and publicity they have been giving to the Bank since its inception in 2008.

The MD pointed out that the United Bank for Africa Plc is a pan-African Bank with the Bank’s financial services group headquarters in Lagos and it has subsidiaries in 20 African countries and offices in London, Paris and New York.

He added that the Bank since it started it operations in Sierra Leone in July 2008 currently has seven (7) branches, 5 in Freetown and 2 in the provinces i.e. Bo and Makeni and they have plans to extend their services to other parts of the country.

Usman Isiaka noted that their Mission as a bank is to be a role model for African businesses by creating superior value for all their stakeholders, abiding by the utmost professional and ethical standards and by building an enduring institution with a Vision to be the undisputed leading and dominant financial services institution in Africa.

He maintained that their business strategy is built on being the Bank of choice for businesses across the African continent.

“Using our extensive spread across the continent we aim to facilitate inter–and-intra-African trade and also be the pivot for the inflow of investment capital,” he revealed adding that they are focusing on supporting people and businesses to succeed across Africa, Europe, and North America.

He informed newsmen that through their diverse range of financial products and services they help people fulfill their goals and enable businesses to prosper.

“United Bank for Africa is committed to being a socially responsible company and role model for all businesses in Africa. As the Corporate Social Responsibility arm of the UBA Group, UBA Foundation is committed to the socio-economic betterment of the communities in which the Bank operates, focusing on development in the areas of Education, Environment, Economic Empowerment and Special Projects. The UBA Foundation was incorporated in January 2004,” he highlighted.

He said the Bank has also supported  the Hands Off Our Girls Campaign of which he said the Bank provided financial support to the Office of the First Lady for the launch of the Project, a campaign that promotes education on sexual reproductive health and rights and the fight against rape in the country.

The new MD also pointed out that the Bank made a donation of One Billion, Four Hundred and Forty Million Leones an equivalent of ($150,000) as part of the UBA’s Foundation direct relief support to the Government of Sierra Leone to the fight against COVID-19. He said amidst the COVID-19 pandemic, UBA Sierra Leone, through the UBA Foundation, supported the Ministry of Basic and Senior Secondary Education Distance Teaching and Learning Program.

He revealed that this is not the first meeting the MD/CEO of the Bank has held geared towards interacting with members of the Press.

The MD revealed that in 2018, they held a Media Parley at Lagoonda Hotel. He assured journalists that he will continue such an engagement with the Press adding that for the UBA Golden Touch Award for this year, the Bank would like to partner with SLAJ and IMC to reorganize the Annual Media Awards and that the MCC Team will work closely with SLAJ and IMC once plans are put in place for the Annual Media Awards.

He ended by reiterating the Bank’s commitment to work with the media in any related development project that will promote media development in Sierra Leone.

On his part, President of the Sierra Leone Association of Journalists (SLAJ), Ahmed Sahid Nasralla, congratulated the newly appointed Managing Director of the Bank ,Usman Isiaka, on his appoinment.

He said SLAJ was established in 1976 with a mission to defend the freedom of the media, freedom of expression and information, uphold the ethics of journalism and exemplary standards of professional practice.

President Nasralla said SLAJ serves as powerful force for the betterment of the nation through the dissemination of accurate and objective information, a constant quest for improved standards and techniques of journalism and work towards the attainment of media self-regulation in Sierra Leone.

He said they are very happy that they were able to work towards the Repeal of Part V of the Public Order Acts 1965 which criminalizes libel and the enactment of the IMC Act 2020, adding that the criminal Libel Law has been the major reason why the media in Sierra Leone is presently poor because business people and institutions are afraid to invest in the media but said with the repeal of this law he is sure that the media will attract more investors to invest in the media.

He said some media houses find it difficult to operate due to the lack of adverts, in that regard, he appealed to the Managing Director to work with media houses in providing adverts.