Authorities of Njala University on Thursday 26th March, 2020 complemented Government’s preparedness efforts in preventing the deadly corona virus. The University through the Community Relations Office and the Njala Hospital distributed veronica buckets and also sensitized town chiefs within the Kori Chiefdom on the symptoms of the Corona Virus and the need for them to institute bye-laws to control the possible spread of the virus in their communities.

He called on them to remain vigilant and re-activate their community task force groups and bye laws to support government to prevent the virus just like they did during the Ebola epidemic.

The Corona virus according to him has hugely affected developed nations with better and sophisticated medical systems. He appealed to the Chiefs to protect their communities by taking direct leadership in Government’s preparedness efforts.

The Town Chiefs assured the University that they will do all in their powers to ensure that their communities are safe and disclosed that they have instituted bye-laws and remain vigilant to support Government.

Njala University has similarly supplied veronica buckets to all the main administrative and academic buildings in the Njala and Bo Campuses with a view to heighten the minds of students and staff of the University on the need to wash their hands daily and to maintain social distancing.

The Community and Public Relations Offices of the University and the Njala Hospital are expected to hold more sensitization meetings with communities on the Corona virus.

SASA was formed pursuant to Part Ⅴ Section 28 (1) of the 2005 University Act of Sierra Leone; stating that: “The staff of the University shall be bound by the terms and conditions of service negotiated by the appropriate staff associations or other negotiating bodies and the University authorities and approved by the Court.”

The Newly elected President Mr. Thomas Philip Songu is the Director of Information and Communication Technology, Njala University. He holds a Bachelor of Science degree (BSc.) in Education with Mathematics major and Economics minor from Njala University, and a Master’s degree of Science (MSc.) in Information Systems Management from University College, London, UK.

He is a seasoned IT professional with over 20+ years implementation experience in strategic management of ICTs spanning Education, Finance, Media, Defence, Telecomm, Mining and Pharmaceutical industries at home and abroad.

Mr.Thomas is also currently serving as the Regional Quality Infrastructure Expert (ICT) for the United Nations Industrial Organization (UNIDO); and recently worked as ICT Expert through the International Organization for Migration (IOM) funded programme in the area of ICT Capacity Building in tertiary education to Sierra Leone.

During his acceptance speech just after his victory, Mr.Songu called on his political opponents to come on board and help him resuscitate the dormant SASA. He assured all that he is keen in moving towards improving the welfare of his colleagues by providing loans, canteen and other welfare services.

The newly elected President has an enviable track record of initiating a number of projects that have benefitted Njala University especially around the areas of ICT and Communication. 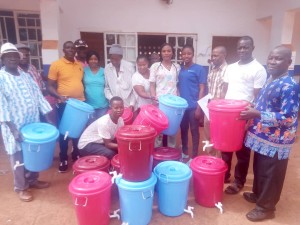