On Wednesday, 19th August 2020, the High Court of Sierra Leone slammed an interim freezing order on the assets of Octea, a subsidiary of Israeli billionaire Beny Steinmetz’s BSG Resources (BSGR), in a lawsuit over alleged environmental damage around a diamond mine.

Lawyers representing residents living next to Octea’s mine, Sierra Leone’s largest diamond operation, requested the order. They claimed there was “clear and present risk” the defendants could expatriate funds to avoid paying out if the court rules against them.

Octea has appealed the judgment on Thursday, lawyers for the plaintiffs intimated.

The case attracted international attention in March last year, when locals launched a lawsuit against subsidiary Koidu Limited over alleged water contamination, respiratory infections and damage to their houses caused by blasting at the mine. They seek $288 million in compensation.

The suit was followed in August by a second, this time against Sierra Leone’s Government, for failing to protect them from the mine’s alleged effects.

“The State has violated (the plaintiffs’) right to a suitable environment,” said the lawyer acting on behalf of residents of Koidu.

That suit also argued that the Government had failed to ensure the relocation of hundreds of households away from the blasting site, as required in Octea’s mining license.

It further claimed Sierra Leone’s authorities failed to protect residents when security forces killed four people during protests against the mine in 2007 and 2012.

Following those incidents, Octea’s subsidiary Koidu Limited reportedly made a goodwill payment to the Mines Ministry to compensate victims of the violence.

Koidu Limited has not acknowledged making any payment.

The cases highlight the growing importance of obtaining and keeping a social license, or community support.

Communities at host countries are growing aware of their right to demand companies meet those expectations, with some choosing the legal path to pursue grievances against international mining firms.

Octea’s parent company, BSGR, is under investigation in several countries, including the US for violating the Foreign Corrupt Practices Act. The company denies the claims. 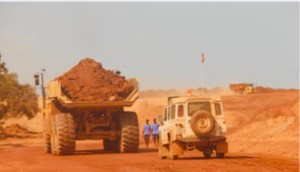