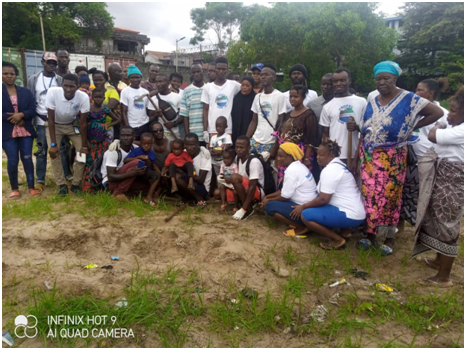 In the discharge of one of the cardinal aspects of his mandate, in fulfillment of an aspect of the Mission of the Civil Rights Coalition, a Civil Society advocacy entity, the Executive Director of the entity, Alphonso Manley, made a passionate plea to the Management of PROPEL in order to build a fence for the Logos Academy School, which is situated close to the sea, especially for the safety of the pupils.

In an engagement on Friday 28th May 2022 at the School premises, situated at Bendu’s Drive, Lumley Beach in Freetown with media practitioners, the Executive Director of the Civil Rights Coalition, Alphonso Manley, intimated how he was on a monitoring tour of the school when he noticed that the second guiding factor in education, which is Comprehensive Safety, has been breached, making it possible for the pupils of the school to gain easy access to the beach simply because there was no concrete fence to prevent them from doing so.

Alphonso Manley used the opportunity to extend profound gratitude to the organization for granting his request expressing delight that at last a solution has been reached in terms of maximum security for the pupils.

He reiterated that with the erection of the fence the pupils of the school will be secured from the sea and the school authorities will now gain control over the children contrary to the previous situation when some stubbornly renege by seen running on the beach.

Chief Operation Officer of PROPEL, Chernoh Timbo, informed members of the Press that PROPEL is a humanitarian organization that is rendering assistances to vulnerable people in the society adding that they also have three flagship programs which are eco-tourism, agriculture and education.

Timbo stated that as a non-governmental organization, they are trying to complement the efforts of the Government disclosing how part of their Corporate   Social Responsibility includes optimizing conditions of living in the community where they operate.

He revealed that the organization awarded scholarships to 25 pupils in the school who are vulnerable also explaining that after they were engaged by Alphonso Manley on the issue of the fence, they thought it fit that it is a welcome idea for the pupils to learn in a secured environment.

Councillor Mahmoud of Ward 442 within the Constituency where the school is located extended appreciation to Alphonso Manley and PROPEL for what he described as a kindly gesture stating that the school authorities will now be able to protect the children of the school from the sea.

One of the pupils, Momodu Turay, said on behalf of his colleagues that they are grateful to the Activist and PROPEL, expressing how they are happy for the commencement of the fence project which he said is for their safety, disclosing how he and his colleagues sometimes go down the beach to play even though they know it is risky.

Fatu Suma, a resident of the community expressed her joy, asserting that from now onwards their minds will be at ease as parents knowing that their children are going to be learning in a safe environment.