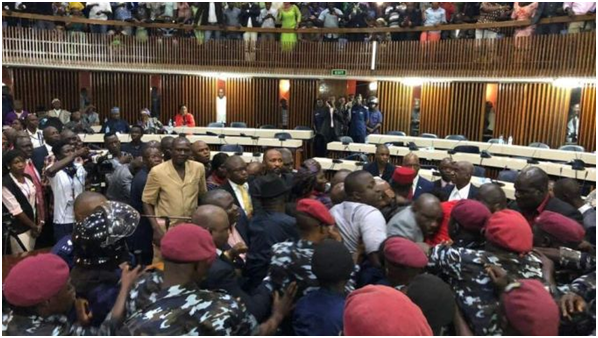 Parliament was, on the 23rd November, 2022 very tense as a brawl broke out in Sierra Leone’s Parliament in Freetown Wednesday (Nov 23) as MPs were in session.

Members of Parliament debated a proposed change to the electoral system to allow for proportional representation in next year’s election.

In video footage, representatives from the ruling Sierra Leone People’s Party (SLPP) and the opposition All People’s Congress (APC) party are seen fighting and throwing chairs.

The Electoral Commission for Sierra Leone advised switching to a proportional representation system for next year’s local and parliamentary elections excluding presidential polls.

The opposition claims the move would be unconstitutional when the Government backs the plan.

However, for it to be passed, it requires parliamentary approval.

The fight erupted around 1100 GMT and had quieted down by afternoon. It was reported that an attack on the Mace attempted considered to be contempt.

According to local reports, the police intervened to calm down the riotous scene and expel disruptive MPs from the chamber.

In a related development the Clerk of Sierra Leone Parliament, Dr. Paran Umar Tarawally has submitted a report of Wednesday 23 November 2022 mass brawl in the well of Parliament.

The report was submitted to the Speaker of Parliament, Hon. Abass Bundu to be acted upon. Part of the Report stated that there was an attack on the Chamber of Parliament by Members of Parliament and some strangers in the Speaker’s Gallery. As a result of this attack, the sittings of 23 November,2022 was disrupted; persons injured, and properties destroyed.

It continued that from eye witnesses, coupled with official Parliamentary footages captured by  CCTV cameras, cameramen and ICT Department, the following persons are considered perpetrators of the November 23″ attack on the Chamber of Parliament: Hon. Aaron Aruna Koroma- Constituency 048, Hon. Lahai Marah Constituency 042, Hon. Abdul Karim Koroma Constituency 059 and the Driver of Hon. Kellie of Lungi.

Properties destroyed during the fracas is said to be in the tune of Total Cost =NLe380,000.