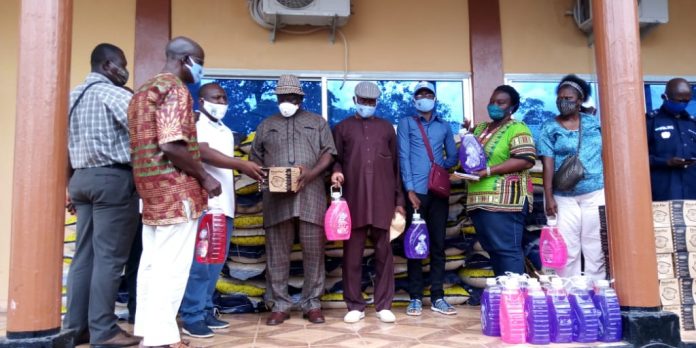 The humanitarian gestures undertaken by the Chief Executive Officer of Pavi Fort- Sierra Leone, Alimou Barrie and team, which started weeks back, targeting all the sixteen districts in Sierra Leone, with the avowed aim of giving supports to break the chain of transmission of the virus it was learnt by this medium is now coming to a close.

These gestures took the forms of offering financial, medical and food supports to the District COVID-19 Response Centres (DICOVERC) as well as local authorities in all the districts to scale up the fight against the spread of the virus in the country.

When the CEO and team landed in Moyamba District on Monday the 22nd June 2020 they donated a 10 million Leones Cheque, 100 bags of rice, 20 gallons of hand sanitizers , 5 million Leones to the traditional authorities in the district and 2,000 pieces of face masks , all totalling 80 million Leones.

During the handing over ceremony by the CEO of Pavi Fort, the District Coordinator of the Moyamba COVID-19 Response Center, Hon. Joseph N. Kaindor, expressed the view that Pavi Fort Sierra Leone’s support was very unique and so far has been one of the biggest donations offered by an indigenous construction company since the outbreak of the corona virus in the district.

Kaindor added that the support was very timely as they have been struggling with finance and food to fight the COVID-19 in that part of the country adding how they have heard so much about the company’s support to other districts.

In his statement, the Chief Executive Officer of Pavi Fort, Alimou Barrie, stated how the support is part of his efforts to complement Government’s strides in trying to curtail the spread of the virus in the country.

CEO Alimou Barrie handed the 10 million Leones cheque to the   DICORVERC and 5 million Leones cash plus 30 bags of rice to the Paramount Chief of Kayamba Chiefdom, Foday Momoh Gulama for the support of social mobilization that had been undertaken by traditional authorities in the district.

The Regional Coordinator of the DICORVERC South, Mohammed Allieu, who happens to be the Resident Minister, thanked the CEO of the company, Alimu Barrie, on behalf of the Government of Sierra Leone for their support towards the fight against COVID-19 in the country. He said the support is in place especially for quarantined homes and they will account for it.

Paramount Chief Foday Momoh Gulama thanked the company for joining the district team in the fight against COVID- 19 and for supporting local authorities in the district.

The donation ceremony took place at the Moyamba District Council Office in the presence of people from all walks of life in the district. 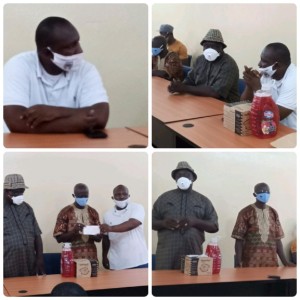 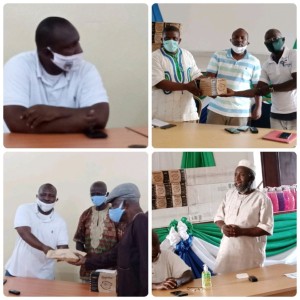