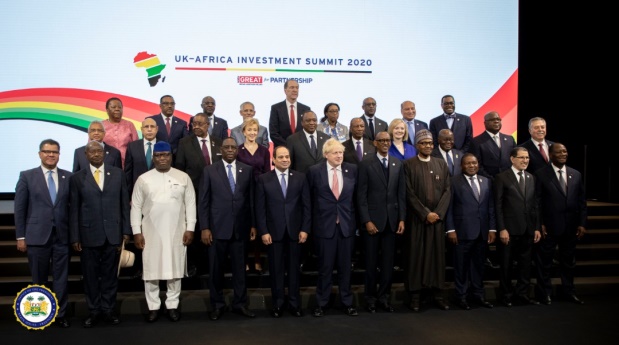 His Excellency President Dr Julius Maada Bio on 20 January 2020 has assured investors at the UK-Africa Summit in London that his Government is determined to diversify Sierra Leone’s economy to guarantee a business-friendly ecosystem with a win-win outcome for potential investors.

Speaking at the clean energy transformation session, the President spoke about key reforms his Government had put in place to enhance and promote investments in the resource-rich West African nation, also with a promising tourism industry. He referenced the country’s Investment Board, which he said had been set up to not only be a one-stop-shop for businesses, but also to provide aftercare support that would protect investments in the country.

He further cited the strides that had been made, through support from the British Government to investments in Sierra Leone, to provide off-grid clean energy to communities around the country. That, he said, was among a series of opportunities for potential investors wishing to invest in renewable energy in Sierra Leone.

On the margins of the summit, President Bio also met the World Bank Group’s President, David Malpass, who commended his leadership model of efficient public financial management. He said the Bank would continue to support the Government of Sierra Leone, while also committing to support the Free Quality Education.

In another meeting, the United Kingdom Minister for Africa, Andrew Stephenson MP, informed President Bio that he would visit Sierra Leone to look for projects that the British Government had supported. He added that they would continue to support the Government of Sierra Leone and assured of DfID’s continued support to the country’s flagship free quality education project.

President Bio assured investors that Sierra Leone was open for business, explaining that the narrative of war, Ebola and corruption that reverberated about Sierra Leone had changed, adding that the country, under his leadership, was fighting corruption to make doing business simple and guarantee profit repatriation.

The UK-Africa Investment Summit 2020 is an initiative of the British Government, which brings together investors from around the UK to meet and explore the key investment potentials in Africa. The British Prime Minister, addressing the summit, affirmed that the UK was looking forward to partnering with Africa to achieve prosperity as Britain looked forward to leaving the European Union.