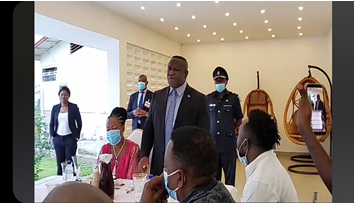 Stakeholders of the entertainment industry in Sierra Leone met with His Excellency the President Dr. Julius Maada Bio and the First Lady, Madam Fatima Bio on Saturday 25 July 2020, at State Lodge, Hill Station, Freetown. The focus of the meeting was how the Government of Sierra Leone, the Office of the First Lady, and entertainment stakeholders can all contribute to promote the growth of the industry.

The consultative meeting was coordinated by the Slim Nation superstar Markmuday and the RFM Captain – Boss LA, after they prevailed on the First Lady to take steps to enhance the growth of the industry, few weeks ago.

A good number of entertainers (about 30 stakeholders) attended the meeting and were drawn from the various sectors of the industry –  music, film, media, comedy, etc.

The meeting was chaired by the First Lady, Madam Fatima Bio. In her opening courtesy, she welcomed all present and assured all of her commitments and that of her husband in giving a facelift to the entertainment industry. She was delighted to have hosted a cross-section of superstars.

On behalf of the entertainers, singer – Sir Wahid presented a list of issues that need immediate Government’s support for the progress of the entertainment industry. Key among the plethora of issues presented include investment in quality , the construction of an ultra-modern auditorium, a policy on more airplay of Salone music on radio and television stations, the establishment of an entertainment fund and more.

The Black Leo rapper, Kao Denero, also presented a supplementary list of important requests, like the establishment of an Entertainment Secretariat, the reduction of internet tariffs by service providers, the establishment of a Sierra Leone Music web portal (www.salonemusic.com), among others.

Madam Fatima Bio further dilated on how she can coordinate all entertainers to complement the efforts of the Government of Sierra Leone to solve the number requests presented by the stakeholders but asked for strong leadership and unity among the entertainers .

Several entertainers contributed to the meeting by highlighting other issues affecting the growth of music, film, etc in the country. Boss LA hugely blamed the DJs, radio stations, and nightclubs for the unpopularity of Salone music over the years. After a rebuttal by Pilot CPO (the President of SLeDU) on the grounds of the quality of our songs, popular singer K Man advised the DJs to “promote what we have.” Several others contributed.

After several statements, entertainers were tasked with the responsibility of putting a strong document together for the President and First Lady of Sierra Leone. The meeting climaxed with funs and chill.

Finally, the First Lady dispatched all present to engage with their various sectors on issues affecting their crafts in each sector and appoint a leader to represent them in the next meeting to be called soon.