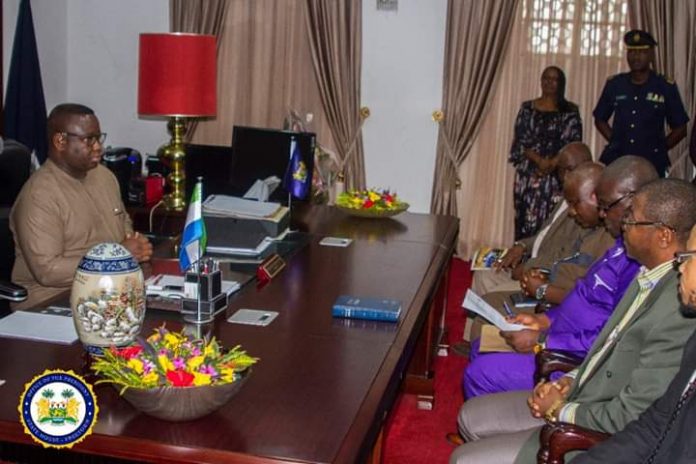 The new Electoral Commissioner for Southern Region and Judicial and legal Service Commissioners have subscribed to the oath of office before His Excellency President Julius Maada Bio in Freetown.

Section 32 sub-section 6 of the 1991 Constitution of Sierra Leone provides that: “A member of the Electoral Commission shall before assuming the functions of his office take and subscribe before the President the Oath as set out in the Third Schedule to this Constitution”.

Commissioner Edmond Sylvester Alpha thanked President Julius Maada Bio for the trust and confidence reposed in him. He assured the president and the people of Sierra Leone that he would work assiduously with the leadership of the National Electoral Commission, NEC, for effective teamwork, adding that he would help to provide a level playing field for all political parties and stakeholders and to conduct credible, transparent and impartial elections in the country.

His Excellency President Julius Maada Bio congratulated Commissioner Alpha and admonished him to perform his duty with all amount of professionalism that would help build national cohesion and strengthen the democratic principles of the country.

“My government will give NEC the necessary support that is required for the effective functioning and conduct of a free, fair and transparent election that will help strengthen our democracy. I congratulate you once more and I wish you well in your new office,” President Bio said.

In another related event, Section 140 of the 1991 Constitution of Sierra Leone provides that: “There shall be established a Judicial and Legal Service Commission which shall advise the Chief Justice in the performance of his administrative functions and perform such other functions as provided in this Constitution or by any other law”.

To that end, Justice Reginald Sydney Fynn, President of the Court of Appeal and Lawyer Mohamed Lamin Tarawalley, recently appointed Solicitor General, took the oath of office. They thanked the President for the opportunity to serve at the judiciary and the country, adding that they would work very hard to maintain and uphold high standards at the judiciary, which they described as an important ingredient towards the success of a country.

The President congratulated the two and urged them to dispense justice to everyone in a transparent manner, noting that justice was an important component of a democratic state.