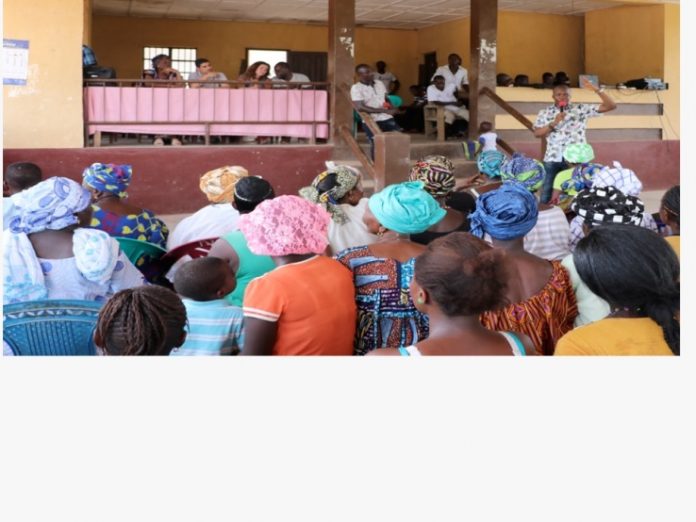 The sensitization which involved presentations of messages on the environment and wild bush burning as well as video screening was done in Moyamba Junction in Moyamba district and Bumpeh Gao and Girehun Villages in the Bo District.

The Deputy Director of National Resources Management, Mrs. Ramatu Massaquoi during the meetings with the Communities spoke about the importance of the environment and the effects of wild bush fires no the environment.

After showcasing various videos on wild bush fire in all the three Communities, the Assistant Head of IEC Department at the Environment Protection Agency of Sierra Leone Madam Fatima Bakarr Sesay also spoke about the effects of bush fire in the Communities and reiterated the efforts and mandate of the Agency which was created to help promote environmental issues in the country in ensuring that Communities live without environmental disasters.

In all the villages where the awareness and sensitizations were done, the Community people were happy to receive the information on wild bush fire. Some of the Elders of these villages admitted that indeed there are bylaws in their villages which deter wild bush burning. They said they have been using these bylaws in some cases but they have not been adhered to. They promised to be implementing these bylaws in other to add to the efforts of the EPASL in helping them to protect their Communities from homes and properties destructions through the wild fires.

While he was speaking on the dangers of bush fires, a Community member, Philip Sei informed his colleague villagers that those who are smoking should not throw their remnants to the bush which is one of the main triggers for wild bush fire. He called parents to help control their Children against bush fire and as well informed the Chiefs to enforce the bylaws in the Communities.