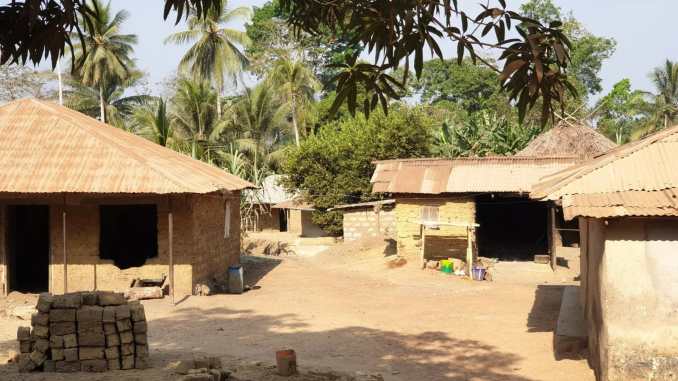 The Government of President Bio should not turn blind eyes to the long standing palaver between the land owners of Sahn Malen Chiefdom in Pujehun district and SOCFIN; a matter which so far mediation by both Vice President Juldeh Jalloh and President Bio has failed to resolve.
Sahn Malen where the palm oil producer – Socfin is located, has become a ghost town as local people flee for their lives, after the death of two young men in the community.
It is still not certain who committed the murder. Many in the community accuse the police of shooting the two men, but others – including the Paramount Chief, say they were killed by men belonging to the traditional Poro Society with instigation from Independent MP Hon. Siaka Sama who has all along championed the cause of the people who maintain that Socfin has robbed them out of their only means of survival by expropriating to itself virtually all the communal lands that they own for their huge plantation. Hon. Sama was detained, is now out on bail.
However, it has emerged that the recent eruption of violence in Sahn Malen has little to do with Socfin and accusation of land grabbing, but a battle for the assertion on power between the Paramount Chief and the local MP. This is unconfirmed though.
Meanwhile, Socfin has made a statement. Excerpts…
“The management of Socfin Agricultural Company Sierra Leone wishes to inform the public on the events which took place over the last few weeks on the Socfin plantation and surrounding areas in the Malen Chiefdom in Pujehun District.
On Wednesday 16 January 2019 the Company’s Agricultural Department closed down just after the arrival of the Member of Parliament for constituency 104, due to no workers turning up for work.
Workers informed management that they would not come to work due to the intimidation from gangs of youths, many fuelled with drugs and which many were not from this Chiefdom.
These gangs were planning to invoke the secret society in various parts of Malen without the authorization of the Paramount Chief. Havoc and chaos pursued over the following days and during all this period mass organized fruit theft continued and many areas of the plantation where no-go zones even for the police.
On Sunday 20 January the Resident Minister came to Sahn Malen to look into the elevated issue of a dispute on a plot of land in Sahn town, which the Member of Parliament wanted to build a constituency building on his private land. The Minister’s visit was a result of the tension that had escalated to such a high level and required his intervention.
On Monday 21 illegal and misuse of the secret society, which has revealed after investigations that a large number of illegal processing mills are placed within the secret society bushes. By the afternoon a huge gang of youths attacked the military and police stationed at the Socfin installation at Jao Junction in upper Malen, which is encompassed and protected by a strong fence with gates.
The attacking gang pushed and damaged a section of fence, broke all windows of the office complex from stones and other objects being thrown and set fire to the security post within the installation. As a result of this unfortunate incident two people died and one member of the police was seriously wounded from being shot at from within the gang attacking the installation.
The injured policeman was conveyed to Bo hospital using the Socfin ambulance stationed at the medical clinic in Sahn town. On the same day, a statement from the Minister of Local Government and Rural Development issued an instruction to all Resident Ministers nationwide making an immediate ban on initiation by secret societies.
Socfin has now started to resume operations, however are concerned these issues do not repeat themselves and that these gangs in weeks prior to this incident who were intimidating workers, resisting and blockading police movements, having organized operations stealing and processing fruit and taking out hundreds of 20 litre containers (batas) of palm oil each day, are stopped.
The management of Socfin want to thank his Excellency, President Maada Bio, his Government and the law enforcing organizations for stepping in and restoring law and order and look forward to a peaceful path ahead, to allow Socfin to continue to grow and contribute to the development of Malen and the country, creating employment, revenue generation from taxes and precious hard currency earnings through exports.”