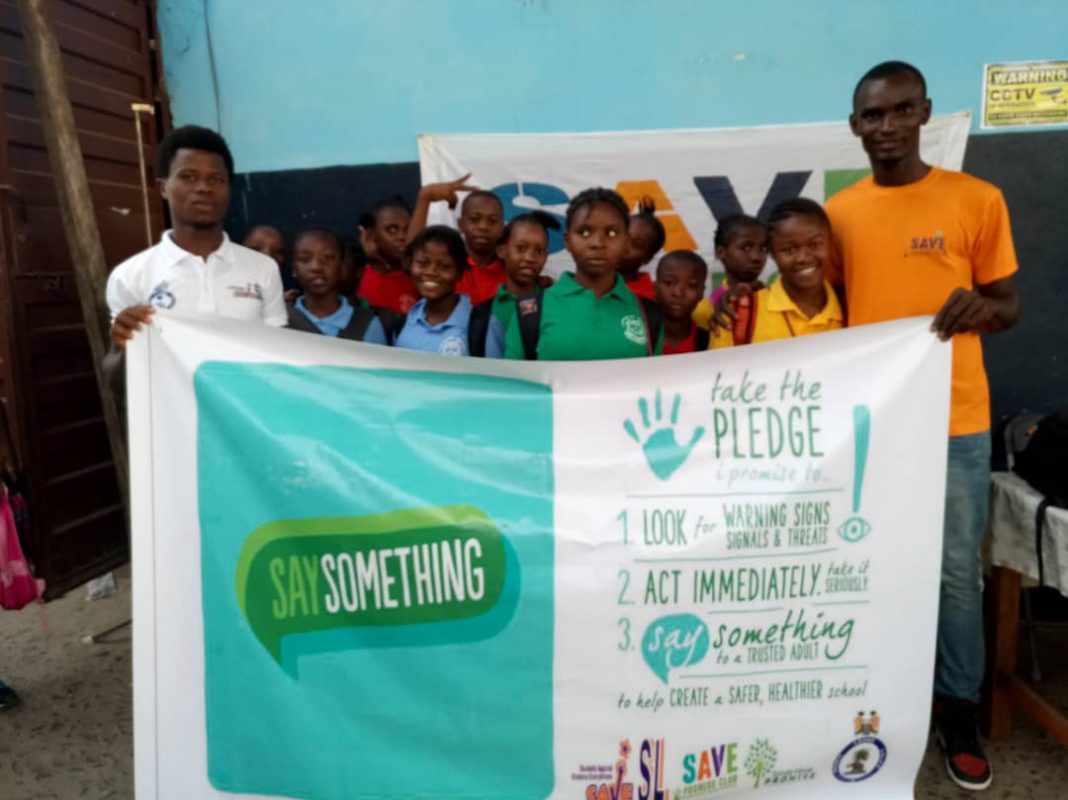 A Civil Society Organization, Students Against Violence Everywhere Sierra Leone (SAVE – SL) on Friday March 1st, 2019 taught over 500 students of the Hammond International School and Academy on how to keep themselves safe in school and the community through their Say Something Program.

According to the National Director of SAVE Sierra Leone, Joseph A. Sesay, the Say Something (SS) Program is designed for Secondary School Students, with a focus of teaching youths how to recognize signs and signals, especially on social media, from individuals that may pose a threat to themselves or others.

The program looks at three (3) simple steps:
1. Look for Warning Signs, Signals and Threats,
2. Act Immediately & Take it Seriously,
3. Say Something to a Trusted Adult

“Individuals often show warning signs and share information BEFORE they are violent, attempt suicide or make threats, and there are steps students can take to PROTECT themselves, classmates and community to help prevent violence,” says Joseph A. Sesay.

It is worthy to note that Incidents of school violence do not just happen without a precursor. “When youths are taught on how to Look for Warning Signs, Signals and Threats, Act immediately and take it seriously, and Say Something to a Trusted Adult, they will be able to reduce violent threats, consequences and also create healthier schools and communities,” he further opined.

Warning Signs are the thoughts, feelings and behaviours, gestures or ACTIONS that could be either obvious or unclear, which can SHOW significant change that an individual may be in NEED OF HELP. They include, withdrawal from others, bullying or hitting, negative role models, excessive anger, extreme mood changes, feelings of rejection, thoughts or plans of harming self or others, blaming others for own failures, fear of going to school, unwillingness to forgive and forget the wrongs of people, feelings of isolation, dramatic changes in physical appearance and personality.

Warning Signs of Violence can also be bragging about access to or fascination with weapons, upcoming attack, warning a friend to stay away from an event or school on a particular date or even rigid beliefs in students.

Threats can contain any communication that has the intent to HARM oneself or someone. Statements such as “someone should do that” (supporting a violent act), “life is not worth living”, “I will show them that I’m tough” etc. are very threatening signs.

Warning Signs and Threats are often found on Social Media, classrooms, hallways, lunchroom, on the way to and from school. They can be in the form of Spoken Words, gestures, photos, videos, written form, actions and behaviours.

Students can help their friends if they can identify the Warning signs, Signals and Threats. Maybe their friends have been bullied or are the bullies. Sometimes they have been abused or being abusive (verbally/physically), they may be a sex predator/being preyed on or they may have a substance abuse or addiction problem. But whatever they are going through, their friends can help them get help if only they can follow the second (2nd) Step which is ACT IMMEDIATELY, take it SERIOUSLY.

When students see, hear or read a Warning Sign, Signal or Threat it is mandatory for them to act IMMEDIATELY and seek help. Acting immediately can be hindered by students taking issues into their own hands. Statements such as “we all spoke to him and he said he would never do that”, “we thought someone else would tell someone”, “we thought they would feel better tomorrow “, “they are too young to hurt themselves or others”, “they just want attention. It is not real”, “let us wait for the right moment to say something” and “if they were going to do something, why would they announce it public?”. Those are some of the excuses from students who should have prevented violence in their schools. Students of all ages can act immediately. It is up to a Trusted Adult to decide the seriousness of the sign, Signal or threat.
Many times, students fear that telling someone will make them a traitor or be at risk of being aliened or physically hurt. But the truth is that Saying Something is different from Telling on someone. Saying Something is getting someone help for their own safety and well-being and to protect oneself and others from harm. The focus is on getting help. On the other hand, telling someone is done purposely to get someone in trouble for a gain. “That is why when a student acts Immediately, he is saving someone from trouble,” explained Anas A. Ansari, the President of the SAVE Promise Club of Hammond International School and Academy.

The Principal of the School, Mr. Bobson Amara, in his statement said that Saying Something to a Trusted Adult who has the experience and knowledge to get help for an individual, can help prevent violence. But students don’t know who are trusted adults are anymore. A Trusted Adult can be a teacher, parent, school psychologist or counsellor, police officer, community organization leader, coach or mentor, principal or school support staff and even religious leaders. To say something to trusted adults, students should bring any text, photos, videos or other communications they have available. If the conversation was spoken, they can write exactly what was heard and submit it to a Trusted Adult.