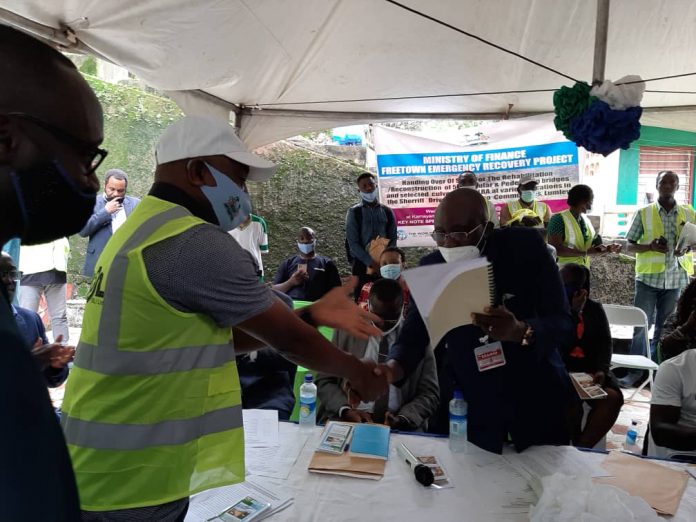 It was reported on Wednesday 8th July 2020 that a Pan African joint venture, CSE/SECON, has taken over  the site for the commencement of the implementation of the Freetown Emergency Recovery Project in the Western Area after emerging as the successful bidders of a National Competitive Bid (NCB) No: SL-MoFED-149753-CW-RFB, and the eventual signing of a contract agreement with the Ministry of Finance for the execution of the project, which is funded by the World Bank through the Project Management Fiduciary Unit (PMFU) of the Ministry of Finance.

The essence of the project is to rehabilitate the roads that were affected by the August 14th 2017 mudslide with a view of re-establishing connectivity and accessibility to those affected communities such as: Kaningo, Motormeh, Regent, Kamayama, Moyiba, Juba, and the Grafton areas.

The event was chaired by the head of the Project Management Fiduciary Unit (PMFU), Alpha Sesay, and drew speakers from the community, relevant Government agencies and representatives of development partners.

The Project Coordinator, Engineer Neilford Rose assured the contractors and the community of the availability of funds for the project.  He said the World Bank and the Government of Sierra Leone have provided 81% of the needed funds for the project to ensure that it does not get financially choked at any point of the project’s life cycle. For his part, the Director of Planning at the Sierra Leone Roads Authority, Engineer Vandy French, expressed an unflinching faith in the contractor’s ability to execute the project well and on time based on their experience and capacity.

The CEO of SECON, Parpah Chendeka expressed his company’s profound honour to be part of the rehabilitation of the infrastructures of these communities. “During the August 14th tragedy, SECON was one of the first responders to the epicenter of the mudslide with machines and personnel. Therefore, it gives me great honour that our company is now playing a part in the rehabilitation of these communities,” he said.

He further dilated on his company’s partnership with CSE, saying “as an indigenous construction company, we are proud to stand shoulder to shoulder in partnership with our brothers from Senegal, CSE, to present a Pan African joint venture for the execution of this all too symbolic project”.

The Minister of Finance, Hon. Jacob Jusu Saffa, said that the construction and rehabilitation of these bridges are long held ambitions of President Bio even before he was elected. “The President saw the devastation caused by the 2017 mudslide and vowed then that he will rehabilitate these roads when he becomes President,” he stated and related the construction of the Kaningo Bridge to Human Capital Development, saying “by connecting Kaningo to the rest of the Lumley area through this bridge, it becomes easier to transport the sick to nearby hospitals; our children can get to school quicker and safer”.

He also said that the construction and rehabilitation of these roads will also ease the traffic burden at the Lumley/Juba area as he intimates that Government will do all in its power to complete the approaching roads to the bridge.

This project is the first joint venture between Secon, a leading indigenous construction company and CSE, the Senegalese regional construction giant. Both companies are currently engaged in the execution of individual multi-million dollar projects in the Western Area and are highly experienced as well as capacitated. 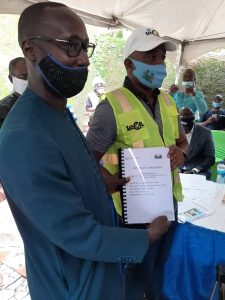