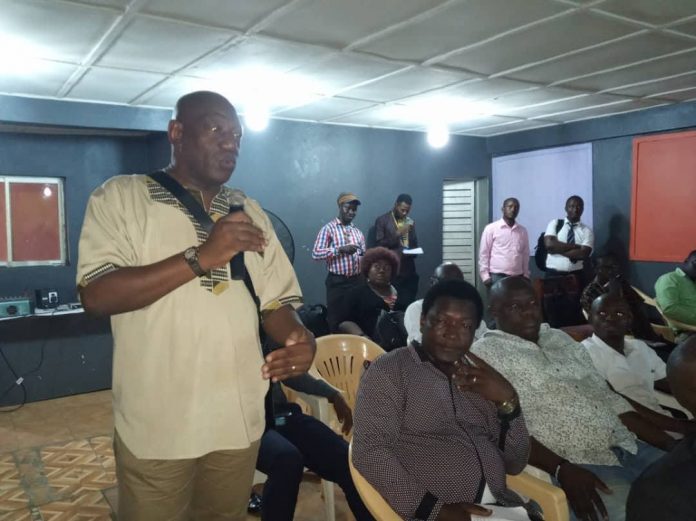 The event was held at the Harry Yansaneh Hall SLAJ Headquarters at Campbell Street in Freetown, and brought together over 30 Managing Editors of Newspapers and 15 radio station managers across the country with representative from WIMSAL, SLAJ and Reporters Union.

In his presentation, Mr. David Panda-Noah, Executive Director of SLRSA said the institution was established by an Act of Parliament in 1996 to regulate the transport sector, also as the lead agency to promote Road Safety in Sierra Leone. He said the Authority has established thirteen (13) offices nationwide and is in the process of establishing more in other major towns and locations in the country. To achieve its mandate, he said, the SLRSA introduced Road Safety Corps on the road to enforce laws relating to road safety and to provide road safety education.

Mr. Panda-Noah said Road Safety refers to the method and measures used to prevent Road users from being KILLED or INJURED on the road. Road users include: pedestrians, cyclist, motorists, and passengers. He furthered that Road Safety is one of the most pressing challenges facing human and economic development. Noting that traffic crashes are the number one killer of people ages between 15-29 and in less than a generation, road crashes are expected to become the world’s seventh cause of death.

Mr. Panda-Noah said while road safety education has primarily been the responsibility of government in the past, limited resources have made it challenging to communicate the importance of key issues consistently and effectively. But it is not government alone that benefits from reducing traffic incidents. The benefit goes to everybody in the society from journalists, business executives, politicians, farmers etc.

The Sierra Leone Association of Journalists has lost several colleagues from road traffic crashes over the years. The most recent was Hon. Frank Kposowa, a former president of SLAJ who died in a gruesome crash along the Freetown – Bo highway. Few months ago, in October 2018, about 16 gallant and brave soldiers of the Sierra Leone Armed Forces (RSLAF) lost their lives in what he named the most gruesome road crash in the history of the RSLAF. The Spur road – Lumley Roundabout crash claimed the live of a lady call SONIA a staff of Crown Bakery, and another one that happened at Ferry Junction East of Freetown that left a 15 year old secondary school boy legs amputated

“Reports on Road Safety requires more than a passing fatality with the driving statistics of an area or region”. He said. He called on journalists dig beneath the numbers to understand the complex interplay of the many factors that ultimately lead to a road traffic fatality.