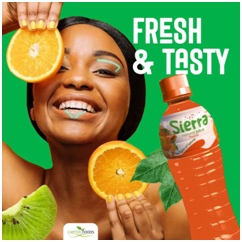 Sierra Juice is now a household name in Sierra Leone since the company that produces its different fruit flavors was established in 2013 by a cacao trader, Hamza Hashim, as a way of reducing food waste and give farmers better livelihoods.

The juice producing entity is part of a parent group known as Capitol Foods through which Sierra Juice drinks or beverages were only and solely distributed via wholesalers.

It must be noted that prior to the commencement of producing Sierra Juice, the founder, Hamza Hashim, experimented the transportation of fruits to sell to markets.

However, he soon realized that due to a lack of cold storage facilities in Sierra Leone, high costs and unreliable nature of electricity, the fruits would start rotting before even reaching the market.

The result oriented entrepreneur then came up with the idea of turning the fruits into “juice as a way to process and preserve the fruit.” Indeed, the idea jelled and soon Sierra Juice, with its different fruit flavours, gained a foothold and became a favorite drink.

Lacking the capital to start processing on a large enough scale, Hashim and his cousin spent months applying for all the funding opportunities they could find. Eventually, they secured $800,000 from Africa Enterprise Challenge Fund, but couldn’t start production until mid-2016, due to difficulties getting equipment into the country because of the Ebola pandemic.

“Sierra Juice targets the new Sierra Leonean,” he informed during an exclusive interview, “she or he is proud of their heritage, and their country, but is ready to take on the world. They are trendy, young, and energetic.” 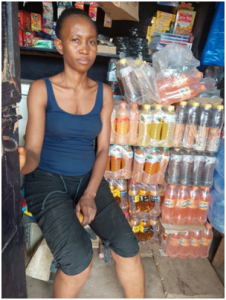 The company now provides more than 5,000 farmers with steady livelihoods by supplying fresh fruit to the company to produce juices. The company’s goal is to provide affordable, natural juices for consumption while providing farmers with an outlet to sell their produce.

Sierra Juice Company takes it upon itself to train farmers and key equipment operators in order to keep costs low. The company is also responsible for its “own water filtration” and “electricity generation,” making Sierra Juice a “360-degree company.”

COMPETE Salone works by offering guidance and matching grants to private companies and is intended to help businesses test innovative ideas with the potential to create jobs, improve livelihoods and increase exports.

It must be noted that initially Sierra Juice was only marketed on a wholesale basis.

With Capitol Foods piloting a new street and small vendor programme as part of their marketing mix, the company has created the opportunity for 140 officially registered vendors in Freetown to expand their businesses and boost their incomes. 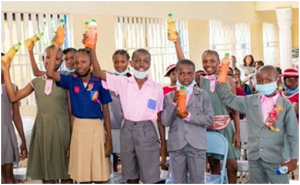 Capitol Foods new street and small vendor programme has the potential to be beneficial for the company and the sellers. It is creating jobs, particularly for women and young people, and giving them the opportunity to buy Sierra Juice directly from the company – which means they earn more on each sale.

In addition, because street vendors offer consumers easy access to a wide range of affordable goods and services, selling through them is an opportunity to access new or hard-to-reach markets.

The Capitol Foods team got its first set of vendors through recommendations from local community representatives and wholesalers based in the company’s underserved areas, where sales have been historically low.

Vendors were trained by providing them with sales, marketing and customer service skills as well as business advice. They also learned about food safety and product storage and handling.

Almost all (87%) of the trainees successfully completed the induction and have gone on to become Sierra Juice vendors. Each vendor received a starter pack with 24 bottles of juice and promotional t-shirts, as well as other marketing material. Capitol Food has also set up a dedicated hotline so that vendors can call to request new stock.

When this medium conducted a random survey to get the reaction of people about this latest move taken by Capitol Foods to sell its Sierra Juice products through vendors, in addition ,to wholesalers, many commended it as a step in the right direction.

One of the them who is a retailer selling soft drinks said the training offered by the company has helped her in growing her business maintaining that it saves her time when she just call to order new stocks which will then be delivered by the company.

An Invest Salone Consultant, Avril Pratt, has this to say: “It is amazing to see women and young people motivated to work as retail agents of Sierra Juice. This opportunity promotes economic empowerment of women and young people by giving them a sustainable revenue-generating stream which contributes to improving their lives and that of their families.”

The Chief Executive Officer of Capitol Foods, Hamza Hashim, stated that they are excited about the initiative as it underpins their commitment to social inclusion and economic participation.

He continued how it has strengthened their network of street sellers and provided better engagement with their customers adding how they plan to support the street sellers further by providing them with coolers so they can add value by selling cold juice.

Hamza Hashim intimated this medium that they are looking at building on the relationships by introducing new Sierra Juice products to the street sellers, which will increase their product offerings and incomes adding how they will trial the same street seller initiative in major towns like Bo and Kenema, to build a larger distribution network of women and youth.

A Development Consultant expressed the view that Capitol Foods is one of the few business entities in the country that is promoting Local Content in the country. He averred that the company is making use of local products to manufacture Sierra Juice and in doing so is helping to boost agriculture which in turn is providing local farmers with a steady source of income. Now the company is empowering vendors through training and a structured business arrangement.

He said as Sierra Juice implies the taste of Sierra Leone that taste is a combination of an indigenous mix of the fruits cultivated by local farmers and the joy expressed by local vendors to ensure that consumers access their various flavored Sierra Juice beverages.

According to what this medium understood, Hashim’s business philosophy is built upon patience. This was what he said, “There are a lot of everyday business challenges. If you try to do too much, you will fail. I’ve learnt the hard way not to try to be too clever, or take every opportunity that comes your way. My main focus is on making just one step forward every single day, and not ten at a time.”

Creating a fruit juice business in Sierra Leone: The story of Sierra Juice