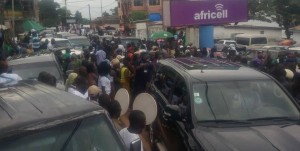 President Julius Maada Bio and his family arrived in Freetown on Wednesday 24th July, 2019, to a tumultuous welcome by his ruling party supporters, after almost ten days absence from the country, which prompted wild speculations about his whereabouts and well-being.

The president was met on arrival at the Freetown International Airport and later at the Murray Town Sea Coach dock by a throng of supporters and party loyalists, who formed a long vehicle convoy to accompany the president and his family to their residence at State Lodge, as traffic in the central district of Freetown grounded to a halt.

To prove he was indeed well and hearty, the president stopped his car and came out to wave to the chanting crowd.

Arriving at Freetown International Airport where he was interviewed about his disappearance by a local news reporter.

President Bio informed the reporter that all that had been said about him when he was abroad was ‘fake news’. He added that such has become part of this country but that he prays for those who declared him dead to live long.

‘May God make them live longer to see me prosper and I pray for them to be in good health, because it is for them I am working for; to see every Sierra Leonean smile. But I don’t know where that news came from that I was sick or dead. But you’ve seen me; and when God is ready for me he will call me at his own time and I will answer to his will,’ President Bio told his audience.

He added in response to questions about his vacation to the UK and then to Kenya to discuss tourism issues with his Kenyan counterpart, Uhuru Kenyatta that, he did not find to rest because ‘even though you want to have some rest; I whole-heartedly didn’t concentrate on resting but took time to discuss issues bordering on Kenya’s prowess in tourism.’ President Bio added that he discussed issues about wildlife conservation and other pertinent tourism issues with his counterpart.

President Bio went on to state that: ‘Just as I have detected it, Sierra Leone is far behind. So even when you are on leave, you are really not on leave. You always have to find a way to ensure that good things come to the country. In that venture, I used the opportunity when I was in Kenya to meet with the president to see how we can improve tourism in this country, because tourism is one sector that made Kenya one of the leading economies in the East and Central Africa. And there are lots of things they have done very well, especially the wild life preservation which is something we need; and he assured me that anything we want to do he is in readiness to support us, so we can have the same facilities here.

President Bio added that his message to Sierra Leoneans is: ‘I am back to fulfil my duties to the people of Sierra Leone. That is why they elected me. I don’t have any other thing and I pray to God for those who declared me dead. They have seen me alive and I am praying for them to live long so they will all see the progress inside Sierra Leone.

I believe Sierra Leone will be a better place if we all work hard. Sierra Leone is a small country. It takes a lot of energy, time and planning for us to make Sierra Leone a better country; and gradually we have changed the image and the narrative; and with time we will see the improvements.’