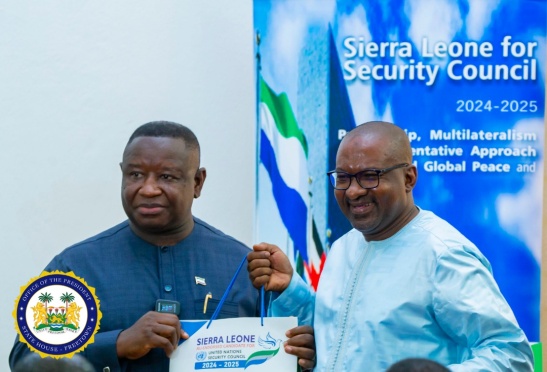 President Julius Maada Bio has again, on the 9th May 2022, launched the country’s bid for a seat in the non-permanent category of the United Nations Security Council (UNSC) for the period 2024-2025 since the country’s first inning 51 years ago.

The Head of State recalled that in just eight years after the country became a member of the United Nations it had the singular honour for the first time to be elected to serve on the organization’s most powerful deliberative body the Security Council.

In his bidding, the President said the two unforgettable years of Sierra Leone’s tenure in the Council from 1970 to 1971, served as bold footprints that continue to define Sierra Leone’s commitment to its international obligations and its unflinching support for a multilateral rules-based world order to advance and sustain global peace and security.

He continued that fifty plus years after the country’s 1970-1971 tenure on the Security Council the nation is once again presenting its candidature for a seat in the non-permanent category of the United Nations Security Council for the period  of 2024-2025.

President Julius Maada Bio also reiterated that as a nation, they had always continued to play their part as a responsible member of the international community, adding that at various times, Sierra Leone had proudly contributed troops and police to peace support operations so that others might enjoy the peace the country was now experiencing.

Sierra Leone can today proudly boast of its credentials as a successful model of peacebuilding and post-war state reconstruction. We owe it to the global family of nations to share our experience and lessons in peace-making, peacekeeping and peacebuilding.

“Also, given the centrality of Sierra Leone’s role as Coordinator of the C-10 on Security Council reform, we will continue to canvass, mobilize and promote support for the Common African Position.  We will unequivocally affirm the need for a comprehensive reform of the United Nations System, which will significantly contribute to upholding the principles, objectives and ideals of the UN Charter for a fairer world, based on universalism, equity and regional balance,” he said.

In a welcome statement, the Director General of Foreign Affairs and International Cooperation, Prince Cole, expressed delight over the history-making event, adding that the bid for Sierra Leone to seat in the non-permanent category of the UNSC for the period 2024-2025 would be held in the General Assembly of the United Nations in June 2023.

He further noted that Sierra Leone would once again be on the verge of ascending the global stage, especially as the sole African candidate for the position.

“I am pleased to inform all that Sierra Leone is running with a faith, blessing and support of not only our sub-regional organization, ECOWAS, but also with the support of the continent as an endorsed candidate of the African Union,” he concluded.

Minister of Foreign Affairs and International Cooperation, Professor David John Francis underscored that the event was historic because Sierra Leone was returning to the UNSC, the world’s most important body for the maintenance of global peace after more than 50 years.

He maintained that the position in the UNSC would give Sierra Leone the perfect opportunity to tell the country’s success story as a country of resilience, hope, and a country that successfully transitioned from war to peace, a country no longer defined by its past, but a country of recent beacon of hope and for Human Capital Development.

“Sierra Leone has maintained an evidence record of support for multilateral rules-based world order, that is why Sierra Leone is increasingly elected or appointed to global leadership organizations such as President of the United Nations Women Executive Board; President of the Arms Trade Treaty, to name but a few.

“We are running under the theme: Partnership, Multilateralism and Representative Approach to Sustained Global Peace and Security. It is our firm desire that this endeavour will contribute significantly to re-brand Sierra Leone,” he concluded.