Makeni was aglow past Friday 11th October 2019 when in a spectacular manner the First Lady of the Republic of Sierra Leone, Her Excellency Fatima Bio, launched the “Hands Off Our Girls” Campaign at the Wusum Playing Field.

During the highly attended program some of those who were present included the Mayor of Makeni City,  the 50-50 group, the Minister of Basic and Senior Secondary School Education, UNFPA representative, Dr. Dickson, Hon. Zainab Tarawalie, representative of Africell SL, the Claudia Campbell Girls, religious leaders and a hosts of other imminent personalities.

In her statement, Honourable Zainab Tarawallie, thanked Her Excellency Fatima Bio for making Bombali District the first district to experience the Hands Off Our Girls Campaign.

She greeted the kids for their courage in being part of what she described as a milestone event for the “Girl Child” in the northern region.

“On behalf of the people of Bombali, we highly appreciate the First Lady’s thought in making Bombali District the first among other districts in which the Hands Off Our Girls Campaign is launched,” she noted adding that, the North is happy and is joining Madam Bio in the electrification process of the girl child.

Speaking on behalf of her fellow girl child, Claudia Campbell an SSS 2 pupil of Sylvanus Municipal Secondary School in Makeni made a brief but emotional contribution. She expressed that, due to the theme of the launch which is the “Academic Welfare of the Girl Child”, the academic welfare of the girl child has been under threat for a long time and they as girls are elated over the First Lady’s initiative which she believes will aid their cause.

“We should be girls and only girls, not mothers”, she underscored.

The Mayor of Makeni City, Her Worship Sunkarie Dan Kamara, in delivering a statement on behalf of the people of the City of Makeni, wholeheartedly thanked the First Lady, Fatima Bio, for taking the ‘Hands Off Our Girls’ Campaign to the North with Makeni as a preference. She said, the Hands Off Our Girls Campaign issues border around every Sierra Leonean and it is a national fight in which all must be involved.

“The Hands Off Our Girls Campaign must be an inclusive fight regardless of age and gender,” she enjoined. Mayor Sunkaru added that girls in Africa with Sierra Leone to be specific are vulnerable and it’s about time this must stop.

“Our girls in Sierra Leone have undergone a lot in their different communities and faced many setbacks which have seen their future under threat. The fight against the girl child being penetrated on at an early age is a fight for all,” she concluded.

The Minister of Basic and Senior Secondary School Education, Alpha Timbo stated that H.E Bio came to governance with a primary aim of improving the human capital of Sierra Leone. He expressed appreciation to the First Lady, Madam Fatima Bio for actualizing the dream of her husband.

“Today, I am a  happy man because one good thing a mother or father can do for his or her girl child is to help her to be educated to the fingertip, and the First Lady’s initiative of the Hands Off Our Girls Campaign is just one important fulfilment from the mother of the nation,” he maintained.

In her keynote address, Madam Fatima Bio applauded the people of Bombali for embracing the initiative including the multitude of girls that were present. She said the fight to get men off young girls and get them educated is a national fight and on that note called on the Paramount Chiefs to own the campaign.

“Though me being the initiator of this campaign, but the fight to get our girls educated and not being dropout at an early age is everyone’s fight”, she emphasized.

She said Government is determined to improve the lives of Sierra Leonean children through education.

“We’re highly determine to fight this cause and we will lay premium on the physically challenged as they are also catered for by this Government,” she concluded. 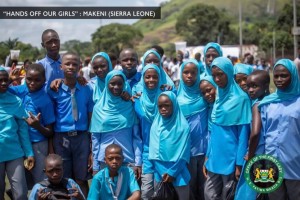