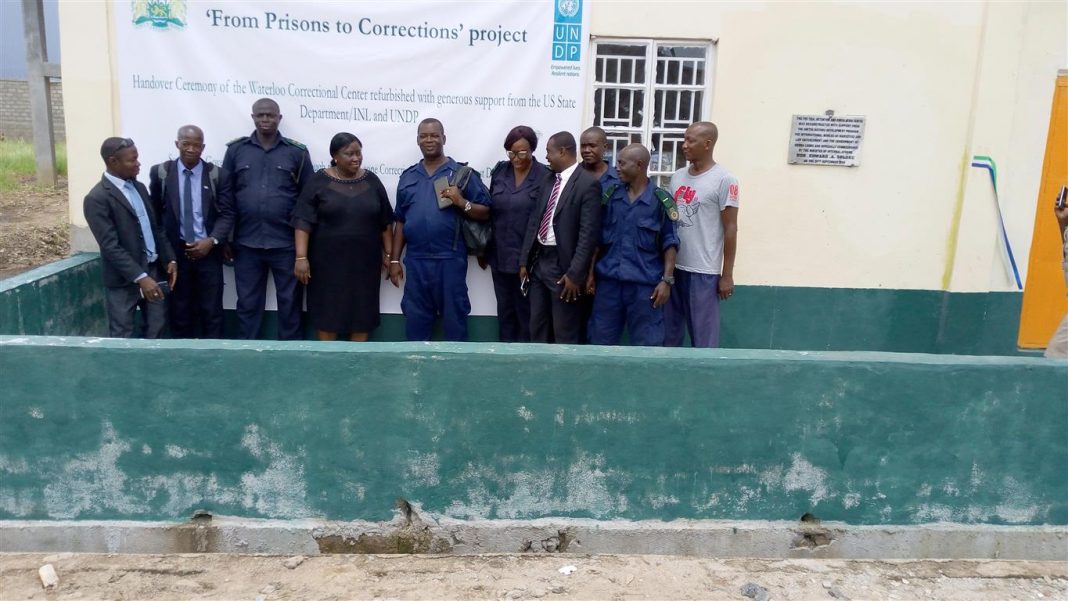 A team from the Legal Aid Board including its Executive Director, Ms. Fatmata Claire Carlton-Hanciles has toured the new Pre-trial Detention and Simulation Center in Kissi Town in Waterloo.

The facility will host remand inmates and those who will be sentence to prison terms below three years by the Magistrate Court in Waterloo. Those who are convicted for felonious offences such as murder, Sexual Penetration, rape will serve their sentences at the Pademba Road Correctional Center.

The facility will hold a maximum of 110 remand and prison inmates. This will comprise 100 males and 10 female inmates from courts in Waterloo.  The team inspected the various cells, beddings, toilets, kitchen and sanitary conditions. ‘I am impressed with what I have seen so far; the fencing, cleanliness, serenity of the environment, number of inmates per cell and the paintings,’ she said.

Ms. Carlton-Hanciles suggested that a wall should be erected to separate the male and female inmates. Also, the facility will need a clinic to treat minor ailments. She further suggested that the compound comprising the Pre-trial Detention and Simulation Center and the Training facility should be fenced to put a stop to ongoing encroachment and grabbing of the land. She added that there is need for a guard post to ensure the compound is not used as a thoroughfare.

Prior to the tour, the team had a meeting with the leadership of the Sierra Leone Correctional Service including the Director General, Mr. Joseph Lamboi and deputy, Dennis Harman. Ms. Carlton-Hanciles welcomed the new facility which she noted will reduce the overcrowding at the Pademba Road Correctional Center.

‘Waterloo has a high crime rate and this is largely responsible for the overcrowding we see at the Pademba Road Correctional Center,’ she said. She called on the leadership to provide rehabilitation opportunities for the inmates which will ensure their smooth reintegration into society upon serving their sentences.