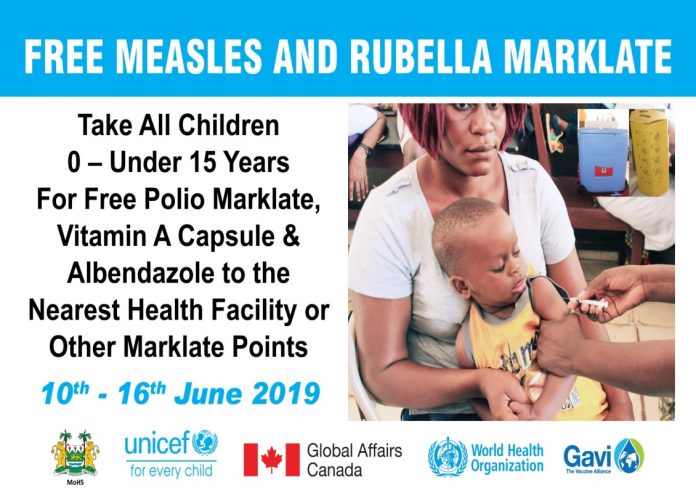 The Ministry of Health and Sanitation supported by GAVI, WHO, UNICEF, CDC and all health development partners in Sierra Leone, has on Tuesday 21st May 2019 hosted one day orientation meeting for Media Practitioners/Journalist on the integrated National Measles Rubella Campaign which is proposed to take place from the 10th to the 16th June 2019. The measles and Rubella campaign is said to  target children from 9 months to 15 Years and to reach approximately 3.2 Million Children nationwide.

Speaking at the ceremony Pa Osman Manneh, Communication for Development Specialist UNICEF, made a statement behalf of his colleagues

He also disclosed that the introduction of such a vital vaccine is a positive milestone towards reversing the plight of under five children suffering from Measles and Rubella, which is at 94 deaths per 1,000 live births according to a 2017 multiple indicator cluster survey. He underscored that one of the main causes of deaths is measles. He also congratulated the Government of Sierra Leone for making it possible for the country to be one of frontline countries in Africa which have introduced the measles and rubella vaccine into the routine immunization schedule.

“We are aware that the media is an important gateway to public information and we are grateful that you remain available to shape society’s views and attitudes towards positive health practices such as immunization,” he maintained

Dr. Lyinda Forma, Deputy Program Manager Child Health/EPI in her presentation emphasized the importance of the Measles and Rubella Campaign which is proposed to take place from the 10th to the 16th June 2019.

She said that in 2016 WHO estimated that Sierra Leone was the third country in Africa with the highest U5MR = 113.5 deaths per 1,000 live births.

Measles is greatest in children aged less than 5 years in overcrowded living conditions, particularly if they are malnourished, have Vitamin A deficiency or are immune – compromised. It remains one of the leading causes of preventable deaths in children under 5 years in spite of the availability of a safe and cost effective vaccine she maintained.

And according to her this is first time we are giving Measles and Rubella Vaccine to children nationwide which targets children from 9months to 15 Years and to reach approximately 3.2 Million Children nationwide.

“Rubella is a viral infection transmitted by airborne droplets when infected people sneeze or cough. It generally cause mild disease in children but can cause arthritis and encephalitis in adolescents and adults. Maternal rubella infection in early pregnancy can severely affect the foetus and can result in miscarriage, foetal death or a combination of disabling conditions collectively known as Congenital Rubella Syndrome (CRS),she informed.

She ended by calling on journalists to educate the public on the importance of the measles and rubella vaccine to children.

TOES to Recognize Individuals and Institutions with Humanitarian Goodwill Award