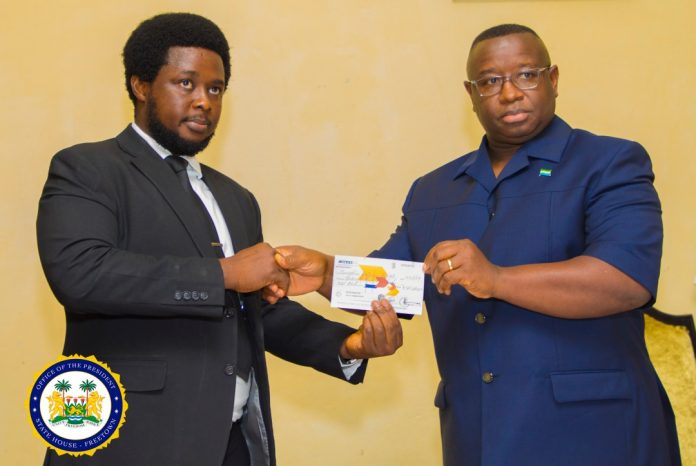 The Anti-Corruption Commission, ACC, has presented to His Excellency President Dr Julius Maada Bio a second cheque of Le 7.5 billion as part of Le 16 Billion of cash so far recovered from corrupt officials.

Before his presentation in the presence of journalists and civil society members the ACC boss, Francis Ben Kaifala, told the President that since his assignment to lead the country’s anticorruption agency he had proven to be result-oriented, a vision that captured the sufferings of the people of Sierra Leone in the hands of corrupt public officials. He disclosed that his team had placed tremendous efforts on the cause and now the results were coming in.

Lawyer Kaifala said they had embarked on a three tracked approach with more focus on assets recovery, noting that with the blessings of President Bio they had been able to balance conviction with non-conviction asset recovery. He said that they had, therefore, been able to recover over sixteen billion Leones in the last twelve months.

“Today, we are handing another a cheque with additional Seven Billion Five Hundred Million Leones which the President will be able to identify what projects to invest in. We are also bringing out the ills of corruption for which we want to thank the President for the opportunity given to me and my team to lead the fight against corruption,” he said.

In his response, President Bio said he had declared corruption as a menace not only to the existence of the nation but also as a national security threat considering its negative impact on the country. He said he was trying to change the narrative about Sierra Leone and that the fight against corruption was something he would continue to pursue.

He stated that corruption was man-made that could destroy a country’s reputation and should not exist in society. He encouraged everyone to come on-board to fight corruption as a common enemy, especially at a time when he was trying to repair the country’s image around the world.

“We have to tackle corruption with every strength we have, which means it has to involve everyone. We must take the fight against corruption as seriously as we can if we are serious about providing social services to our people so we cannot allow corruption to become fashionable. We will continue to give more powers to the ACC to go after corrupt individuals,” he assured.

Deputy Minister of Finance, Dr. Patricia Lavaley, said that the event was the second attempt at collecting funds from the ACC into the consolidated revenue fund to help finance the much needed development initiatives across the country. She said the funds collected would be used to finance the new diagnostic centre in the country as mandated by President Bio.

It could be recalled that in December last year, the ACC presented its first cheque of over Le7.5 billion of recovered monies.