Sierra Leone’s leading mobile operator, Africell, on Friday 28th June 2019, commenced the 243rd Independence Anniversary of the United States of America with a bang at its head offices in Wilberforce. Present at the celebration were officials of the US Embassy in Sierra Leone, Ministers of Government, Members of Parliament, Brand Ambassadors of the company, staff of Africell, subscribers and members of the Press.

During the celebration, which was held under a huge canopy, guests interacted with staff and officials of the Embassy in a family manner. Afri Radio’s Manager, John Konte, disclosed that a raffle draw will be held at exactly 18.00 hours and all present should send a blank SMS to 7474 and stand a chance to win 2 Airline tickets to the USA plus other attractive prizes. Abdul Aziz Gabisi of Africell welcomed all the guests, informing them that the gathering is in celebration of the 243rd Anniversary of the American Independence Day, which is on the 4th July 2019. 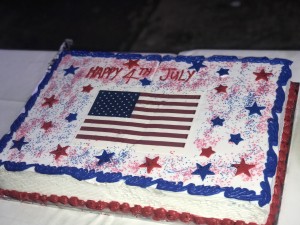 Speaking to the visibly party-ready guests, Joe Abass Bangura, Chief Corporate Affairs Officer of Africell, gave a brief history about the origin and growth of the USA. He disclosed that from humble beginnings and with a population of 2.5 million people in 1776, the USA has grown to over 300 million embracing all nationals in its wake. Presently the USA has 43 million foreign nationals from every continent in the world. Significant to note is the presence of some 38,257 Sierra Leoneans in the country (According to US State Bureau figures 2017) Remittances from these is estimated at US$12.1 million in 2017, second to remittances from Guinea.

Joe Abass Bangura further disclosed that Africell is an American company, owned by its citizens and relationship with the US Embassy dates way back to the inception of the company. Today Africell has an enviable space in Sierra Leone, offering relevant services to Sierra Leoneans in every sector and enhancing the right to communicate as well as providing the relevant space for the development of youths and complementing the development of the country’s human capacity. Africell, he said, is proud to partner with the US Embassy in Sierra Leone to celebrate this year’s Independence Anniversary, which will fall on the 4th July 2019. In respect of this celebration, Africell will Launch on Monday 1st July 2019, a new promotion to last for one week. Subscribers will be able from the 1st – 7th July to make calls to the USA for just Le3, 000 and can talk for 30 minutes. This amount is valid only for 24 hours and can be replicated the next day till the 7th July for the same amount.

Excitement grew when the raffle draw began as guests prayed fervently to win the 2 tickets to travel to the USA. Several prizes were won including 1 Samsung sound bar, 1 water dispenser, 1 Panasonic Home Theatre, 1 Ultr Turbo Vacuum Cleaner, 1 Techno 43’’ LED TV, 1 4 Bonner Gas Cooker and 1 refriferator. Winners of the 2 tickets to the USA were Mohamed Barrie, a sales rider and Mariama Turay a staff of Africell in a transparent electronically controlled digital mixing. The event was climaxed with a party session.