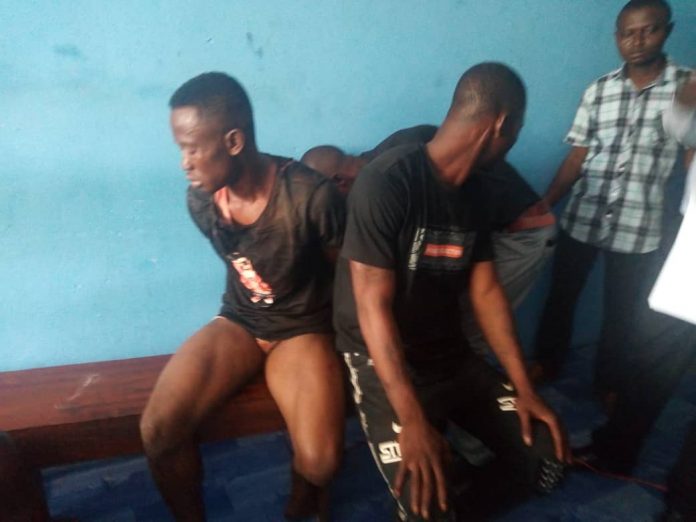 Moyamba town woke up one morning with a rare case of armed robbery in the township. About 11 armed robbers terrorised 5 houses at the Reservation Area, some of which had staff from the CSE construction company and the Human Rights Commission of Sierra Leone, Southern Region.

The Human Rights Commission staffs from Bo were in Moyamba with their Commissioners to undertake outreach activities when they were attacked by the armed robbers. Their phones, iPads and bags containing cash were carted away and their volunteer was damaged with a machete on his head and foot. The attackers were said to be dressed in black overall.

During their operations at one house where they seriously wounded the inhabitants, one of them could not escape after an alarm was raised by the Moyamba District Council Chairman. The robber was caught after missing his way. The Chairman brought him to the Police immediately.

The armed robbers also invaded the Convent were Catholic nuns are resident and also carted away properties worth millions.

The Moyamba District Council Chairman, Joseph Benedict Bogba however mobilised some men and they went on the rampage to apprehend the armed robbers who were said to have come from Bo City to cause havoc in Moyamba.

9 out of the 11 armed robbers were caught in the last village out of Moyamba. They were brought to the Police station amidst thunderous applause from hundreds of people who had gathered at the station. Some phones and properties were also retrieved. Three accomplices were also arrested.

As all of this was going on, the Catholic Diocese of Makeni was also attacked. In the press release below issued by the Catholic Diocese in Makeni, the victims state that inasmuch as they are ordinarily serving the community in which they live by providing religious direction and humanitarian services, they feel threatened and are considering pulling out of Makeni if their concerns are not immediately addressed by the local and national security agencies.

Below is the press release issued by the Catholic Diocese of Makeni:

A MESSAGE OF CONDEMNATION

It is with acute pain and sadness that we inform our parishioners and all people of goodwill about the tragic and heinous incidents which occurred in the convent of the School Sisters of Notre Dame in Bumbuna on the 2nd May, 2019 and in the Convent of the Clarissan Sisters of Our Lady of Guadalupe in Mile 91 on the 16th May, 2019.

On these two occasions, our sisters were viciously assaulted by armed robbers at their convents in the early hours in the morning – around 1:30am. Besides the physical injuries sustained by some of the sisters who were ruthlessly beaten with machetes, all of them who experienced these ugly incidents are now going through painful mental and traumatic crisis. It is shocking, brutal and disgustful for the sisters, their young novices and aspirants. The convents were looted, community and workers’ monies stolen and other valuables like computers carted way. This is not only a violation of the nuns’ privacy but of their human dignity. It’s abhorrent!

These are the words of one of the victims of the second attack: ‘We are no longer safe, our security is not guaranteed;’ we might not return to that community.”

We, as a diocese, out-rightly condemn such brutal and dastardly acts perpetrated against our innocent sisters who came to serve our people in the areas of education, health and human development especially for our women, and to bring the message of love and peace to all.

As a country renowned for its peace, security and stability, this is intolerable and we wish to implore all our major local and government stakeholders – the security forces, police personnel, chiefdom and local authorities to ensure the safety of our dear Rev. Sisters. Why attack the innocent who came to give us life? We are also equally aware that this does not reflect the character of the vast majority of Sierra Leoneans but it is the outrageous handiwork of a few criminals who must be stopped and taken off our communities and streets.

At the moment we, as a diocese, have no option but to stop the Sisters from resuming their activities in the parishes since they cannot carry out such services in an unsafe and insecure environment. Besides, we are also considering to withhold our services or close down our diocesan institutions – university, primary and secondary schools, hospitals and clinics etc until the safety and security of all our agents of evangelization, especially our religious sisters are assured.

Meanwhile, we humbly ask our Catholic faithful and all people of goodwill to join us in praying for our sisters that they may fully recover from this tragedy eventually, and that peace, security and justice may prevail in our nation and in our communities.