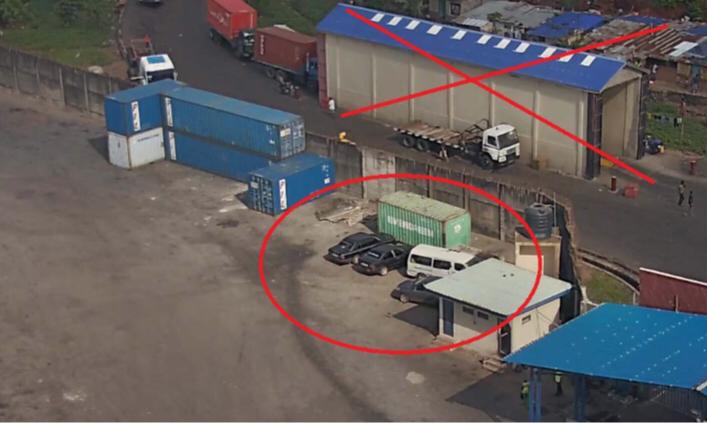 On Tuesday 2nd July, 2019 Bollore Transport and Logistics in a press conference held at their conference room at cline town in Freetown, informed pressmen about their concerns over the construction of the weigh bridge by Nectar Sierra Leone Bulk Terminal (NSBT) at the Freetown Terminal Entrance which has led to accidents and traffic congestion in the Freetown terminal entrance.

Speaking at the press conference, Patrick M. Jarbee, Health Safety and Environment Coordinator of Bollore disclosed that since the construction of the weigh bridge, they have raised their concerns to NSBT and relevant stakeholders regarding the said construction that has posed security threats to not only the Freetown terminal but the community as a whole and up till now no actions has been taken.

He further said that due to the construction of the bridge at the entrance, there has been a lot of accidents, the most recent being on Sunday 31st June 2019, where a vehicle loaded with timber waiting to be weighed hit and destroyed the fence, vehicles, etc. This has cost Bollore millions of Leones to reconstruct the fence and repair the damaged vehicles.

He furthered that these concerns were raised with the past administration, but no actions was taken and they are still calling on concerned stakeholders to address the current issue.

Emerson M. Kamara, Public Relations Officer, Indigenous Transport Owners Association, said that there are lots of challenges faced by transport owners and they have written letters to the stakeholders responsible, but it has been fruitless and he recommend that there be a weigh bridge at Hastings   instead of at the Freetown terminal entrance. This, he maintained, will surely ease the traffic congestion and accidents that do occur at the Freetown terminal and Fourah Bay Road axis as it will reduce the vehicles queuing at the entrance of the quay waiting to be weighed, effectively blocking the road.

He concluded by saying that within 72 hours, if actions are not taken for the removal of the weigh bridge at the entrance, they will withhold their services as transport owners, as it makes their vehicles and drivers open to accidents and confrontation with residents in the community over parking space.

Lamin Koroma, Chairman Sea Side Community, also disclosed that the community has raised concerns concerning the construction of the weigh bridge in their community, especially as it poses threats to the lives of their children in the community.

He disclosed that he has written a lot of letters to stakeholders like ONS, SLP, SLPA, State House etc. in order to get the company to relocate the weigh bridge elsewhere, but all these moves were fruitless.

Gassimu S. Fofana Head of Communications/Public Relations, Bollore Transport and Logistics, said that there has been a lot of consultations regarding the position of the weigh bridge and the security threat it poses to their working environment and the community as a whole.

He recommended that the weigh bridge be relocated to a convenient place where it will not affect anyone.

This writer and other journalists went to the offices of NSBT to get their own side of the story, but were denied entry into the premises by the security. Efforts were also made to contact officials of the institution by phone, but all proved futile. However NSBT’s side will be published when access is gained and an interview granted.