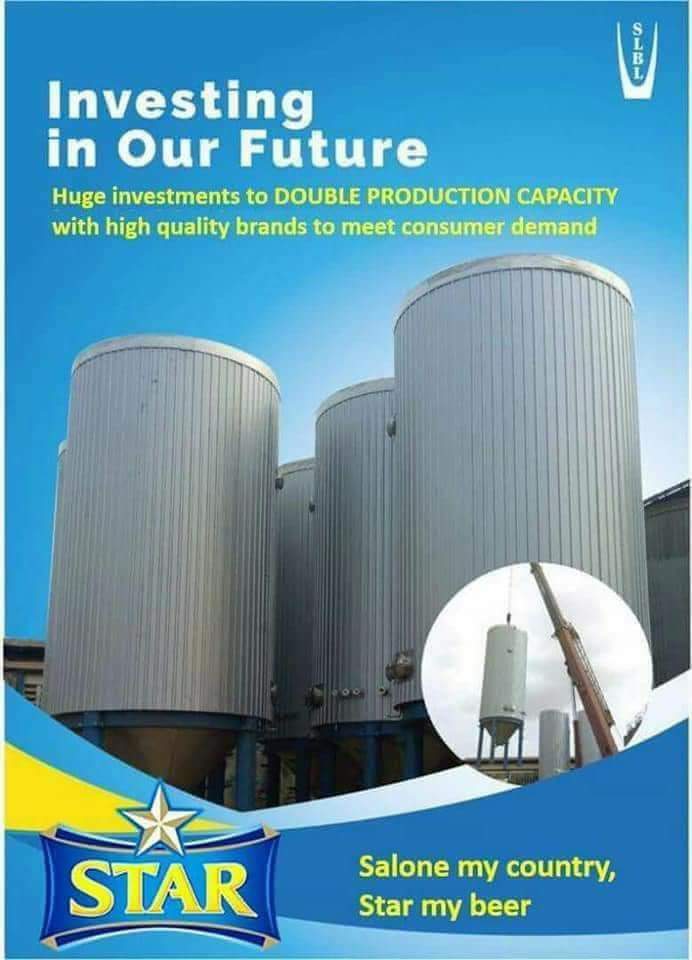 The leading brewer of alcoholic and non-alcoholic beverages in the country, Sierra Leone Brewery Limited (SLBL) continues to capture the affection of its numerous customers right across the country for what many have so far described as the company’s production of high qualitative drinks saying they really enjoy consuming those drinks.

One remarkable accomplishment that the company is widely extolled for is its excellent implementation of the country’s Local Content Policy. Despite the fact that country is affiliated with the Heineken Foundation in the Netherlands and has external shareholders it has ensured over the years to have Sierra Leoneans in its employ as long as they possess the requisite qualifications and skills instead of largely importing foreign expatriates. Even where foreign expatriates are employed it is the company’s policy to have Sierra Leoneans who should understudy them and after a period of time the nationals should take over their positions.

To further deepen its rolling out of the Local Content Policy SLBL is making use of sorghum, which are locally cultivated, in the brewing of some of its beverages. This has encouraged certain farmers to grow sorghum where it is very ideal to do so and at present the number of sorghum farmers has increased exponentially standing close to 30,000 in various districts. SLBL has been steadily supporting these farmers in diverse ways to increase their yields in order to match up with their demand. What this has led to is a symbiotic relationship between SLBL and the sorghum farmers. These farmers have a steady source of income helping to financially take care of various domestic responsibilities.

Distributors of SLBL’s variety of beverages are Sierra Leoneans with an exceptional case of only few foreign business people. The distributors retail the beverages, Star Beer, Guinness, Mutzig, Salone Beer, Multina etc  in crates to bartenders, club owners, restaurants and others from  which customers purchase. Depending on the prowess and rapid purchases from distributors recommendation could be made to the Sierra Leone Brewery Limited to assist with certain equipment like bar, beach tables, chairs, openers and many have benefitted from such offers.

With regards the company’s  Social Corporate Responsibility, SLBL has done a lot and is determined to continue doing so. The company gives priority to residents within the Wellington Industrial Estate where it is situated when it comes to offering of jobs as long as individuals within that locality are qualified. This has helped in poverty reduction through meaningful engagement of young people who were hitherto jobless.

SLBL, in collaboration with Heineken Foundation, has been rolling Water and Sanitation Projects in different communities closer to where it is located. It has constructed solar powered water wells that are benefitting residents in those places who were finding it extremely difficult to access pure and clean water supply. The recent ones that were commissioned are those in Kamara Town and another nearby community.

Added to that, the company has assisted in the construction of health facilities from which locals are receiving medical treatments easing constraints formerly faced.

By all estimation the Sierra Leone Brewery Limited is acclaimed for timely churning out the Local Content Policy and its Corporate Social Responsibility doing so doggedly and remarkably.

To Sympathize with Affected Families of the Wellington Fire Disaster…. SL Brewery Donates 1,000 Crates of Maltina Can & 100 Bags of Rice...