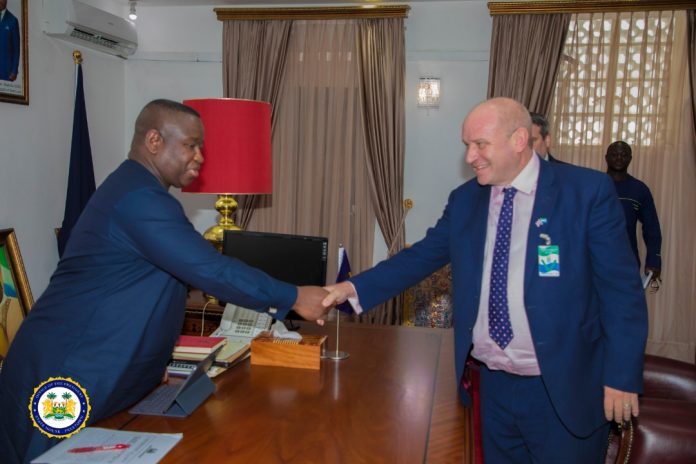 While presenting the High Commissioner, acting Minister of Foreign Affairs, Alhaji Kanja Sesay said that after years of hard work, Mr. Warrington was leaving Freetown to prepare for another assignment. He said over the years, the outgoing High Commissioner had served the country in a diligent manner.

Mr. Warrington, who is preparing for another assignment in Mali, said it had been an interesting three years working in Sierra Leone. He recalled taking up duties in the country during the post Ebola period during which the British Government undertook many post Ebola reconstructions, adding that that was a period in which British assistance to the country reached its highest level for a long time.

He stated that they were glad to have contributed in the electoral process that was peaceful, fair, credible and transparent and the subsequent peaceful transfer of power. He said the United Kingdom remained the biggest bilateral donor to Sierra Leone and that had been a long commitment through which the UK Government had been able to support the West African nation.

“We have been able to support the security sector in the country, particularly the RSLAF and now through the support of DfID, we are focusing on the education sector. I hope my successor will be able to continue the good job I have been doing and to further strengthen the relationship between the two countries. It was a pleasure to work with you,” he ended.

“We want to thank you particularly for the role you played in the aftermath of the Ebola outbreak and the elections which were very difficult moments. The British military assistance has also been another area of cooperation in which the UK has done quite a lot and we want you to continue to support the military establishment here because we have so much in common. We hope to have a similar and better relationship with your successor as we have always hoped to keep a very good relationship with the UK,” he said.