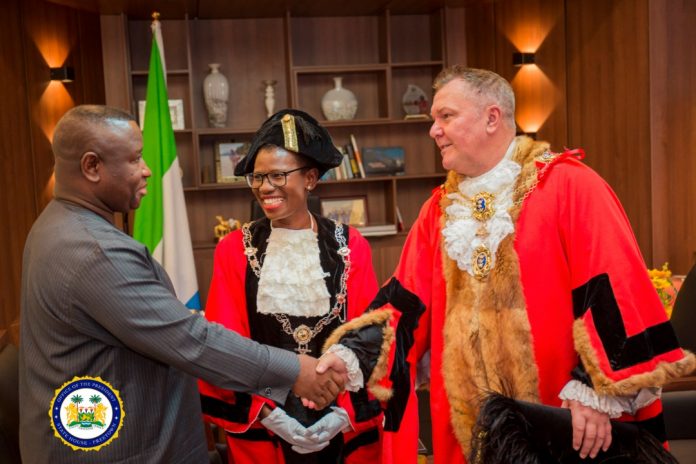 As a way of cementing ties between the UK Metropolis and the Freetown Metropolis, Steven Wilson, has paid a courtesy call on His Excellency President Julius Maada Bio at his State Lodge residence, Hill Station in Freetown.

Mayor of the Freetown City Council, FCC, Yvonne Aki Sawyer, who presented the visiting team to President Bio, said that the Mayor from UK was in the country as part of celebration of forty years of twinning between the FCC and the City of Hull. She said the twinning relationship started back in 1979 by a female Mayor.

She noted that as a female Mayor herself, it was an honour to welcome the delegation from their twin city, adding that the FCC was pleased to be working on strengthening the relationship between the two cities.

Mayor Steven Wilson of Hull City said it was an honour to meet the President and thanked him for the time accorded his delegation. He said Freetown was very much in the thought of the people of Hull and that their twinning with Freetown was considered valuable than any other twinning.

He disclosed that upon his return he would pass on his experience in the country to Hull City. He said they were aware of the Transform Freetown Initiative and that it was a pleasure and an opportunity to get a first-hand experience which they would report to their City Council in the UK.

In his response, President Bio said he was happy to receive the visiting team in the country. He said Freetown had relationships with other cities across the world; however, he described the one with the City of Hull as unique.

“We are very pleased that you have been able to be here. After years of relationship, we want to see how we can strengthen and deepen the relationship for the benefit of our two cities,” he said.