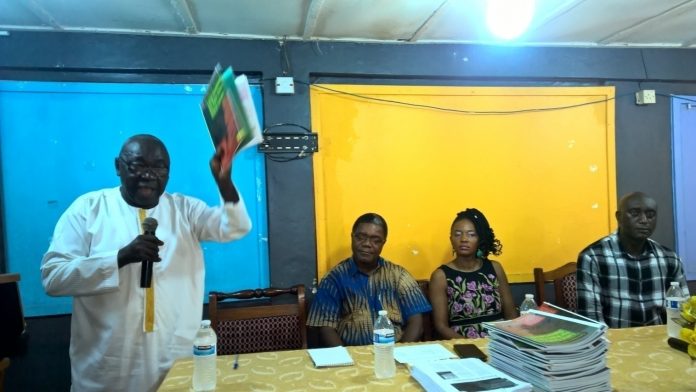 FIAN, an international human rights organization and Green Scenery on Thursday 30th of May 2019 launched a case report which documented serious of human rights violations and abuses by SOCFIN against the People of Sahn Malen Chiefdom.

The report which was launched at the SLAJ Conference Hall in Freetown attracted stakeholders and representatives from government, local and international NGOs and the media.

SOCFIN is a multinational company controlled by a Belgian businesses man Herbert Fabri and the French group Bollore, which has developed a business empire in many parts of Africa.

According to the report, since the arrival of the Agribusiness Company in 2011 as part of a large-scale investment in palm oil production in the Southern Province of Sierra Leone, social conflict has raged in the Sahn Malen Chiefdom.

The reports further stated that affected communities who have lost access to and control over their land and have been exposed to serious human rights violations and abuses since 2011. “Several issues emerged, spanning from the right to land, food, water and a healthy environment, to workers’ rights, women’s right, the rights of the elderly and right to education. Added to these are serious violations and abuses of civil and political rights, including the right to peaceful assembly and association, physical integrity and clear cases of criminalization of human rights defenders’’,  said the report. It also points to other allegations of corruption, lack of transparency and non-implementation of corporate social responsibility promises by SOCFIN.

Speaking at the launch ceremony, Mr. Edward Sam who is a founding member of the Human Rights Commission in Sierra Leone said that the report is timely and may further inform the on-going mediation efforts by the Office of the Vice President. “We are convinced that the current settlement of the Sahn Malen conflict would prove constructive in reaching a peaceful agreement between all parties’’

Alphonsus Gbanie who represented Human Rights Defenders Network highlighted issues regarding police and military brutality in Sahn Malen. He said that Government wants to protect the company because of its development agenda.

Joseph Rahall, Executive Director of Green Scenery, noted that the report will guide the mediation process and government needs to have a re-look at the issue at Sahn Malen Chiefdom and further step-up to resolve it accordingly.

Meanwhile, FIAN International has advocated for the realization of the right to adequate food for more than 30 years. Its mission is to expose violations of people’s right to food wherever they may occur. It stands up against unjust and oppressive practices that prevent people from feeding themselves. The Belgian non-state actor has closely followed the Sahn Malen case since 2012.