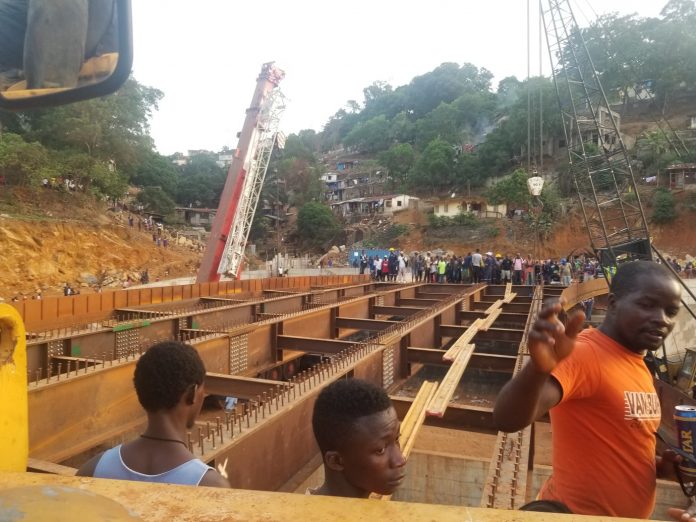 In a bid to introduce the country’s first-ever flyover bridge at Hill Cut Road, Sierra Leone’s leading road construction company, with services ranging from building and the construction of estates and roads to granite production and haulage, Gento Group of Companies on 29th May 2019 erected 175 tons of iron (the heavy iron carriers of the flyover bridge), which when coupled will be about 200 tons.

The company is 100% owned by a young Sierra Leonean entrepreneur Mohamed Gento Kamara who has been working tirelessly to bring development to the country and create job opportunities for young people.

Following the end of the 11 years civil war, Sierra Leone was left in a deplorable state, as it affected all sectors in the development of a nation.

In addressing some of these challenges, both past and present governments have made frantic efforts to improve the road network in the country.

Gento Group of Companies, which is the leading indigenous road construction company in Sierra Leone, has taken the lead in helping the government to achieve this goal.

Recently the company was hailed by Sierra Leoneans both at home and abroad for the speedy and quality work done so far on the Jomo Kenyatta, King Harman and Hill Cut roads.

Since the commencement of the second phase of the project, Gento has mesmerised Sierra Leoneans as they watched in amazement the workers frantically erecting various sectors of the construction work on the flyover bridge and work is fast coming to its logical conclusion.

On-lookers at the site were full of praise for the indigenous Sierra Leonean entrepreneur for taking this massive venture. Residents in the area now move around with pride as they claim immediate ownership of the flyover as it is in their backyard, whilst residents in other parts of the country feel proud to be identified as Sierra Leoneans.

During the erection of the iron fittings for the flyover bridge, the Minister of Works, Peter Bayuku Conteh and his Deputy, Philip Tondoneh, both praised the work of Gento Group of Companies. They were satisfied with what they saw.

According to drivers and other road users, the King Harman Road, Hill Cut roads that are currently under construction by Gento Group of Companies, when completed will be one of the best roads in the country.

Jomo Kenyatta, King Harman and Hill Cut roads according to road engineers are one of the most difficult terrains in Freetown because of its hills, rocks, and topography, but the fact that Gento and his professionals are able to undertake such construction work, is a testimony of the professionalism of workers he has.  These roads are very much important to ease the traffic congestion in the capital Freetown linking the Central Business District (CBD) to the hill sides at Wilberforce, Regent, etc. Gento Group was first named Fimet Benton-Villa SL-Ltd. due to the inclusion of other companies.

Speaking on some of the past challenges the company had faced, Ing. Idrissa Koroma said they were facing serious challenges with some utility companies like Electricity Distribution Supply Authority (EDSA), Guma Valley Water Company (GVWC) and SIERRATEL. Idrissa Koroma stated that Gento Group is the only construction company that conducted hydraulic survey before construction, in order to avoid overflow of water from the drainages unto the environs. He further explained that to access their quarry, they drive up to 45 km to collect granite and this entails time and money as fuel is heavily consumed.

To access water was another challenge and if measures are not put in place in the coming years, accessing water in the capital will be difficult, the engineer said.

On the construction of the Waterloo Township roads, he said they are facing some financial challenges, but that they are in advanced talks with the government and are getting positive response. He further said that they will commence work early next year, adding that they will finish the Hill Top roads later this year.

“99% of the top staff of Gento Group are young Sierra Leoneans and we will live to see these roads for decades, and so we are doing all our best to do quality work and our CEO, Mohamed Gento Kamara, is very passionate about developing this nation” he said.” 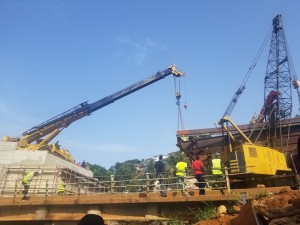 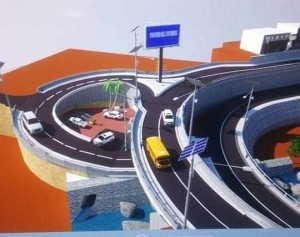 Jomo Kenyatta, King Harman and Hill Cut roads will have the first ever Flyover Bridge in the country when completed, and will be the best road in the country, road users say.

In addition, Gento is also commended by residents in the car wash area for building a mosque and church for the community. The company is also providing humanitarian assistance to Muslims during this month of Ramadan and is also on record for dishing out various gestures aimed at improving the lives of the people residing in this community.

Gento is Far above Fanning Tribal Unrest in Freetown