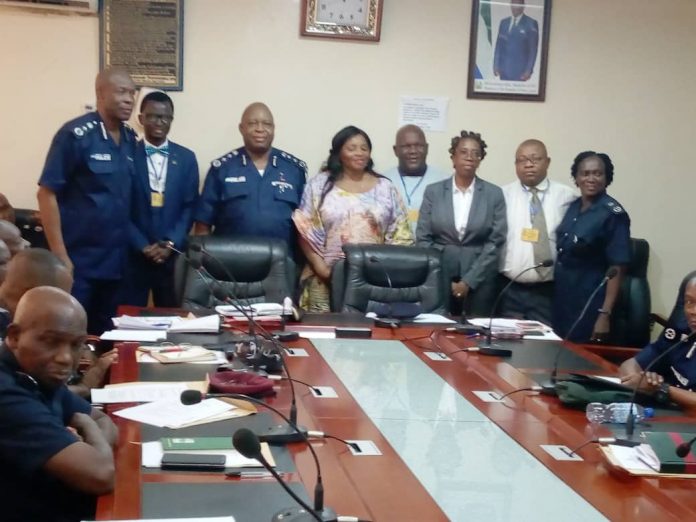 The Human Rights Commission of Sierra Leone (HRCSL) on Wednesday 26th June, 2019 met with   the Executive Management Board (EMB) of the Sierra Leone Police (SLP) at their headquarters on George Street in Freetown.

The meeting is a continuation of the HRCSL’s strategic engagement with partners, institutions and communities. The SLP is one of the key partners of the HRCSL.

The meeting was chaired by the Inspector General of Police Dr. Richard Miogbe.

During the dialogue, the HRCSL Commissioners were formally introduced to the Police EMB and a further dialogue on general human rights issues across the country.

The IGP welcomed the Commissioners and congratulated them on their appointment. He registered his institution’s commitment to ensure that the life and property of everyone are protected thereby protecting human rights. IG Moigbe highlighted some of the challenges faced by the SLP more so in addressing public order matters.

In her response, the Chairperson of the Human Rights Commission of Sierra Leone, Mrs. Patricia Narsu N’danema, noted the critical role of the SLP in the Commission’s Referral Partnership Committee which meets quarterly to discuss actions taken on matters referred by the Commission to its partners.

Commissioner N’danema further underscored the need for strong collaboration between the SLP and HRCSL in areas such as data collection on sexual and gender based violence and capacity building on human rights.

In contributing to the dialogue, the Vice Chairperson of the Human Rights Commission of Sierra Leone, Commissioner Victor Lansana called for the relocation of the police cell at the Central Police station in Freetown as it was observed to be appalling and below the minimum standards.

Also in attendance at the meeting from the Human Rights Commission were: