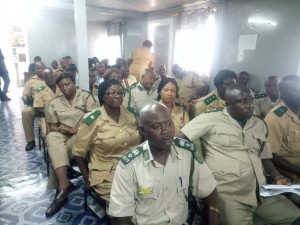 The Management of the Sierra Leone Correctional Service under the dynamic leadership of Joseph Lamboi as Director General of the institution on Friday 7th June 2019,took a cross-section of journalists on a conducted tour of its facilities and informed the Press about the achievements  made so far since the new Management took over.

Among these are the newly-constructed conference hall, computer lab, Child Friendly Center, Library, Officers Mess, Agricultural Project including Livestock Farming, Adult Education, Technical Training Workshop for inmates, Games and Sports, Reintegration Talk Shop – where the inmates go and buy food stuffs, cold water, drinks and other items which reduce the risk in trafficking drugs and contraband into the Correctional Centers, as some relatives of inmates send money instead of food. Other programs meant to catch up with the global trend were also showcased.

In his statement Director General Lamboi said the engagement with the media is to strike a partnership and uphold the ethics of accountability, transparency and to change the public perception about their operations and show case their recent achievements, challenges, and where they want to go as an institution, to maintain confidence building especially so when they operate behind the scenes.

“We are currently managing a little over 4,400 inmates nationwide, and Pademba Road Correctional Center which was built for just 300 inmates is hosting over 50% of that number. The Bo Correctional Center is the same and most of the Correctional centers suffer the same overcrowding which poses a security threat to the nation such as (prison breaks) but  the institution is working with government and other donor partners to improve on infrastructures  and work on relocation of the center to Songo village, Koya Chiefdom, for the Freetown Pademba Road Correctional Center where the institution has secured 80 hectares of Land for the project. The institution is also in need of logistics and some of the vehicles being used are almost clocking 2 decade and so we spend a lot of money on repairs. Government has promised to buy us some vehicles but we are yet to see them,” the DG maintained adding that due to the shortage of vehicles such affect their work.

According to him, in places like Moyamba, even to take the inmates to court is difficult and there are times when their officers have to take motor bikes for inmates or walk to make sure the inmates attend court which is also a risk.

In his presentation Denis Harman ,Deputy Director SLCS, said they currently manage about 4,418 inmates with 22 Correctional Centers nationwide, with a little over two thousand personal and 137 officers.

“The introduction of Prison Pilot Court project has helped us to fast-track court proceedings of inmates who have been in remand without trial for long, a Human Rights Audit where we have improved from the past,” he revealed.

“We have secured funding that will enable the 22 centers to have electricity supply through solar power and internet and CCTV cameras which will also be available in all centers as at the moment only Pademba Road Correctional Center has the technical training project and Art Work which are now benefiting 242 inmates with a million Leones and above for each of them at the Rokel Commercial Bank out of the profits made from sales of different products,” he went on.

He anchored that if Sierra Leone is ranked the most peaceful country in West Africa, it tells  that the Correctional service is doing well because they keep potential criminals that may disturb the peace of our nation behind bars.

Elizabeth Gbagla, SLCS Female Commanding Officer, said the Child Friendly Center was established for children below age 2 years whose mothers have been convicted and sent to the Correctional Center.

“We make sure the children  are well taken care of, they no longer eat the same food with inmates as it used to happen before, we teach them, they have toys to play with and even watch cartoon movies and allow  the suckling  mothers to come out to suckle their children,” she added.