His Excellency President Dr Julius Maada Bio is one of seven presidents across the world have been invited by Rwandan President His Excellency Paul Kagame to grace this year’s commemoration of the country’s Liberation Day, called Kwibohora25 on Thursday 4 July 2019. 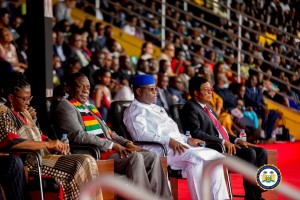 More than 25,000 people watched the 4 July twenty-fifth anniversary parade at the Amahoro National Stadium, in Kigali, featuring the defense forces and national police personnel, wearing colourful uniforms and marching to revolutionary songs played by the army band. Liberation day marks the day when the Rwanda Patriotic Front stopped the 1994 Genocide against the Tutsi and effectively liberated the country. Over a million people lost their lives in the genocide.

“For three long months in 1994, our country’s survival was in doubt. A segment of the population was being hunted. More than a million people were murdered,” President Kagame said at the event.

It could be recalled that Rwanda was one of three countries invited by the government of Sierra Leone to share experiences at a two-day national dialogue forum on democratic consolidation for peace and national cohesion in May this year. The conference in Freetown, which also discussed the creation of a National Peace Commission, heard experiences from the National Unity and Reconciliation Commission of Rwanda, the Peace Council of Ghana and the National Cohesion and Integration Commission of Kenya.

Also, in March this year a delegation of visiting members of the Sierra Leonean parliament, who were in Kigali on a working visit, said they were keen on critically looking at best practices in one of the fastest growing African nations with a view to adopting them back home. Such practices include empowering women in decision-making processes growing its economy.

The country is not just creating a business-friendly environment but also diversifying the economy from being almost entirely dependent on agriculture to now being developing services and a growing manufacturing sector.