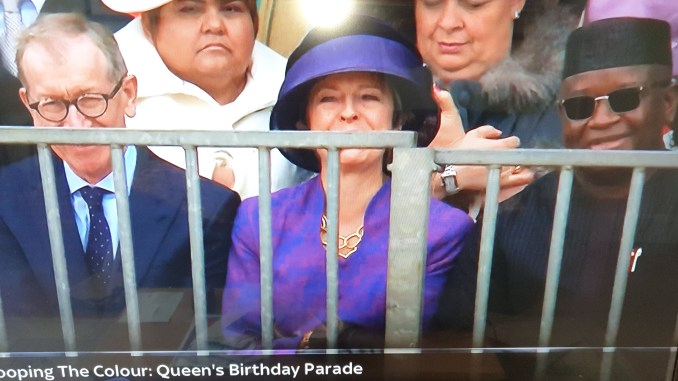 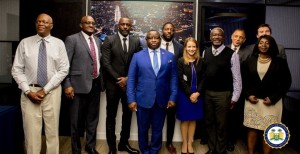 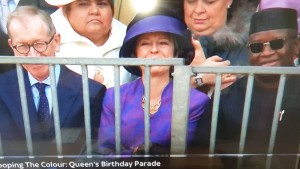 In a remarkable feat of accomplishment, His Excellency President Julius Maada Bio attended the Queen’s Official Birthday Parade which was marked by Trooping the Colour at Horse Guards Parade, St James Park on Saturday 8th June 2019.

His Excellency President Julius Maada Bio was guest of the United Kingdom Prime Minister, Theresa May and husband, Mr Philip May at this year’s official birthday commemoration of the Queen. Both the Prime Minister and President Bio sat side by side as they watched the ceremony at the Horse Guards Parade in Whitehall.

The Queen was joined by members of her family including the Prince of Wales, the Duchess of Cornwall, the Duke and Dutchess of Cambridge and the Duke and Duchess of Sussex. The Duke of Edinburgh, who celebrates his 98th birthday on Monday 10th June, has retired from public duties and did not attend.

The Queen has earlier celebrated her 93rd birthday in April but the trooping the colour ceremony originated from the traditional preparations for battle and has commemorated the birthday of the sovereign for more than 250 years.

Earlier, His Excellency President Julius Maada Bio was hosted by the UK Prime Minister, Theresa May at No. 10 Downing Street as part of the commemoration of the Queen’s Birthday ceremony and both the Prime Minister and President Bio also discussed about the just-concluded UK-Sierra Leone Trade and Investment Conference.

His Excellency President Julius Maada Bio was accompanied to Downing Street and the Trooping the Colour Parade by the outgoing Sierra Leone High Commissioner to the United Kingdom, H.E Tamba Lamina. H.E Tamba Lamina has been highly commended by Sierra Leoneans and investors for his outstanding leadership in organising the Trade and Investment Conference.

The invitation of His Excellency President Julius Maada Bio by UK Prime Minister, Theresa May to the Queen’s Birthday Parade and his visit to No.10 Downing Street will continue to demonstrate the UK Government’s confidence in the impressive Leadership of President Bio and his Government.

In another development, which when it materializes will give this country a big facelift, the English actor, producer, director and musician, Idris Elba OBE, told President Bio of his plans to transform Sherbro Island into a world-class city as part of his drive to give back to Sierra Leone. Meeting with President Bio on the margins of the UK-Sierra Leone Trade and Investment conference, Idris Elba told President Bio that he wanted to make Sherbro Island a great touristic destination.

“I want to come to Sierra Leone for the first time under your fantastic leadership,” Idris Elba OBE stated. He also stated that he will like to see people travelling to Sherbro Island for culture, tourism and entertainment. He added that “The Sherbro Island will be a city for everyone”. Also explaining about the project, members of his delegation said that the transformation of Sherbro Island will make it a West African regional economic hub focusing on tourist destination, entertainment, convention centre, innovative affordable housing, aquaculture etc.

Some of the benefits of the project highlighted by his delegation included creating a powerful economic growth engine, deepening human capital through education and training, diversifying income sources for government and citizens, transforming the country’s international image and improving infrastructure and transportation links. Through the project, Idris Elba OBE also assured President Bio that he will use his international reputation to contribute in rebranding Sierra Leone with a new message. He also spoke about his long-term aspiration to invest in education and training to create a workforce in Sierra Leone for the film industry.

Responding to Idris Elba OBE and team, President Bio thanked Idris Elba OBE for the thought of investing in Sierra Leone. He told them that such project has always been his aspiration for the Island to transform it into a great tourist destination. He said because of the level of neglect of the Island over the years, he has made it a duty to always spend the Christmas at the Island. “Every time I went on holiday, I would tell the people that help to transform the Island was on the way so today I am happy that the help is here,” President Bio said.

According to the biography of Idris Elba OBE, his father is a Sierra Leonean and mother a Ghanaian.