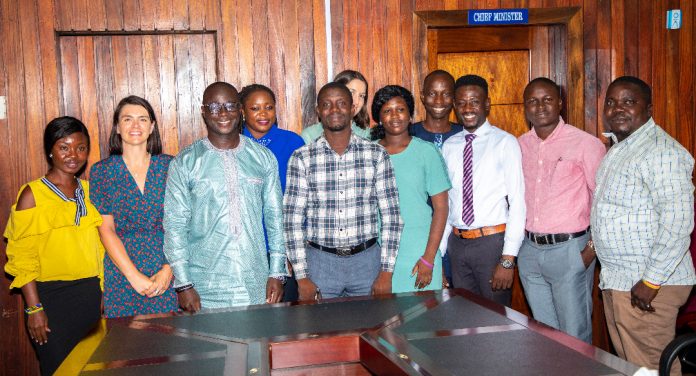 Yusuf Keketoma Sandi, Press Secretary and Presidential Spokesman, hosted members of the Strategic Communications, International Projects from the United Kingdom Prime Minister’s Office and Cabinet Office. The Strategic Communications Specialists are on a research/scoping visit to Sierra Leone to better understand the challenges in relation to government communications in Sierra Leone with a wide focus across Ministries, Departments, Agencies and the Office of the President.

“We are here to assess the current communications capability of the Government of Sierra Leone and make a report of the key findings with recommendations in the short and long term,” Emily Poyser noted.

Welcoming the delegation, Press Secretary and Presidential Spokesman, Yusuf Keketoma Sandi expressed appreciation to the visiting team for choosing Sierra Leone at a time when the new President believes that engaging citizens on government activities and programmes is an enabler to participatory democracy. He informed the delegation that the new Government inherited a weak government information infrastructure but that both the Office of the President and Ministry of Information and Communications have overhauled the infrastructure for efficiency and effectiveness.

“We have huge challenges to recruit more information/communications officers in MDAs, there is a problem of mobility for existing communications specialists/officers, poor salaries, not enough training,  lack of resources and equipment. There are huge challenges with both capability and capacity,” Keketoma said.

In the Office of the President, the Press Secretary also said that as part of creating a stronger relationship with the independent media they will also appreciate support in funding independent journalists to accompany the President on overseas trips while also to increase visibility of President’s activities overseas they will need support with the capacity for live broadcast of his official overseas engagement.

On Wednesday, the delegation will visit the Ministry of Information and Communications, Ministry of Health and Sanitation, Ministry of Basic and Senior Secondary Education, Environmental Protection Agency and Office of the First Lady.