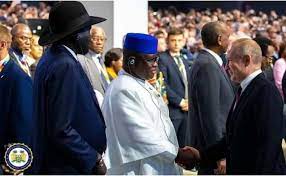 In 1963, the Embassy of the USSR was opened in Freetown and in 1965, the Sierra Leone Embassy was opened in Moscow. At the time, it was the only diplomatic mission in Eastern Europe and Central Asia, the North and South Caucasus, the Balkans, Eastern, Central, and Southeastern Europe, along the Black Sea.

Following the collapse of the Soviet Union after the secession of the Baltic States of Latvia, Lithuania and Estonia which heralded the secession of several other states in the Union, the USSR ceased to exist as a State. Therefore, on the 7th of December 1991, Sierra Leone announced the recognition of the Russian Federation as the successor State to the Soviet Union.

Since the establishment of the Embassy in Moscow, Sierra Leone had accredited 11 Ambassadors to serve as Presidential Representatives in the Federation, and Ambassador Mohammed Yongawo is the 12th.
During the more than decade long civil war in Sierra Leone, the Russian Federation relocated its Embassy to Guinea’s capital, Conakry. A strong case has been made to the Russian Government to re-open its Mission in Freetown and that is under consideration.

On the 18th of January 2022, the Russian Federation and the Republic of Sierra Leone celebrated 60 years of fruitful diplomatic relations.

Sierra Leone and Russia have hosted high profile officials in each other’s capital. From ministers {including the visit of two of Sierra Leone’s Foreign Ministers – Dr Alie Kabba (2019) and Professor David Francis (2021) to heads of departments and engineers, exchanges have been taking place. The visit to Freetown of the Russian Deputy Minister of Foreign Affairs with responsibility for Middle East and Africa , Bagdanov, is one of the highlights of the enduring and promising relationship. The successful participation of President Bio in the first Russia-Africa summit in Sochi, Russia in 2019 formed the climax of the fruitful ties with the Russian Federation.

In nearly six decades, the Republic of Sierra Leone and the former Soviet Union, now the Russian Federation, have collaborated at bilateral and multilateral levels in several areas like international organizations, security, education to name but a few.

It is worth mentioning that thousands of Sierra Leoneans were educated in the former Soviet Union and dozens are currently studying in various fields in the Russian Federation.

Celebrating these fruitful bilateral relations is the confidence and trust both Governments have, to agree on a visa-free movement for holders of Diplomatic and Service passports and the deepening of the bilateral cooperation.

Sierra Leone has provided an opportunity for Russian mining companies to operate in the country. It is significant to note that Russian mining companies have played a significant role in creating jobs for young Sierra Leoneans and are also servicing their Corporate Social Responsibilities to communities where they operate, as well as fulfilling their tax obligations to the government.

On 16th September 2020, the Ministry of Trade and Industry in collaboration with the Ministry of Foreign Affairs and International Cooperation hosted an “Accelerated Growth and Investment Summit in Freetown”. The two-day summit was conducted as a result of Ambassador Yongawo’s strategic engagement in the Russian Federation. The meeting brought together a Consortium of major international investors, including Inova Capital and Allied Identity.

These investors proposed $3.7 billion as ‘direct foreign investment’ into the Sierra Leone economy. Energy, E-Health, E-Education and infrastructure were identified as key areas for investment.
Energy.

During the Russia-Africa Summit, His Excellency President Julius Maada Bio discussed with his Russian counterpart Vladimir Putin on multiple business opportunities from which both sides can benefit. Those opportunities centered around energy reformation. In H.E Bio’s meeting with the Russia Energy Minister Mr Novak on the sidelines of the Sochi summit, they agreed on a working group on energy.

On the 25th of August 2020, the first joint Zoom meeting was organised by the Sierra Leone’s Minister of Energy Alhaji Kanja Sesay, who doubled as Team Lead, and the Deputy Minister of the Russian Federation, Mr. Sorokin Pavel Yurievich headed the Russian team.

During the meeting, the two countries discussed the present state of their ties and discussed the possibilities of deepening it in the spheres of fuel and energy. The two sides exchanged views on the promising projects that were discussed during the Working Group meeting. Both countries also discussed Oil and Gas projects.

Transportation
At the end of the Russia-Africa Leaders’ Summit in Sochi, Russia, President Bio discussed with his Russian counterpart on collaboration in the transport sector and for Russian support to Sierra Leone. In 2021 a team from the Sierra Leone Ministry of Transport visited Russia and held fruitful discussions with the GAZ group.

Sanitation
President Vladimir Putin promised to donate 200 garbage trucks to strengthen Sierra Leone’s Waste Management Sector, and 50 of those trucks were commissioned by President Julius Maada Bio on the 1st December 2020 in Freetown. The Russian Government has promised to provide further support in this area.

Health
Russia and Sierra Leone have extensively collaborated in this field in the past and continue to do so. Many of Sierra Leone’s doctors trained in the former Soviet Union and now in the Russian Federation. 80% of the current crop of Sierra Leone students in Russia are studying Medicine.

Russia was one of the countries that came to the aid of Sierra Leone following the outbreak of Ebola. Russia sent support to help combat the coronavirus.

There are conversations between the Sierra Leone Ministry of Health and eminent Russian specialists to extend their expertise in Telemedicine to Sierra Leone. Similarly, the Ministry of Technical and Higher Education is in talks with Russian higher institutions for possible exchange programs.

Human Capital Development
Records show that the first African student to have studied Medicine at the RUDN University was a Sierra Leonean. Since then, Over 2000 Sierra Leoneans have benefited from Soviet/Russian scholarships in undergraduate and post-graduate courses.

Upon his appointment as Ambassador to the Federation, H.E Yongawo renegotiated with RUDN and other universities for more slots to be awarded to deserving Sierra Leonean students to be trained in the fields of Medicine, Security, Engineering, Agriculture, Mathematics, Economics etc.; so, from a total of 37 students, in just three years we can now boast of nearly 150 students studying in various fields across the Russian Federation. All of the students are tuition-free and are being provided yearly stipends by the government of H.E President Bio.
Sierra Leone and Russia are reliable partners, and long shall this partnership continue.

QNET Warns Against Fraudsters Using its Name to Fleece People

Op Ed-   Might Makes not Right, Unjust Wars are Doomed to be Lost