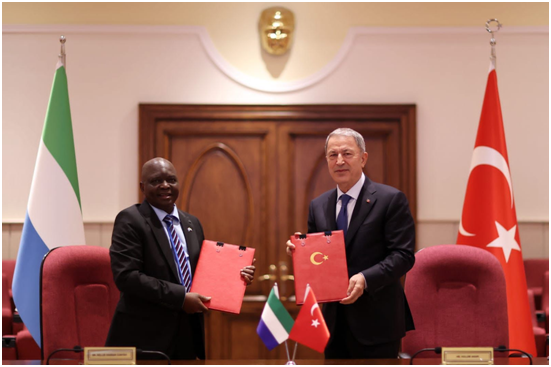 A Military Framework Agreement was signed on the 5th of August 2022 by Sierra Leone and the Turkish Ministry of National Defense and the existing bilateral relationship between the two countries strengthened, under the leadership of Ambassador Mohamed Hassan Kaisamba.

The Framework was signed by the Sierra Leone Minister of Defense, Brig. Gen (Rtd) Hassan Kellie Conteh and the Turkish Minister of National Defense, Hulusi Akar.

The purpose of the Agreement is to provide a framework for developing and furthering cooperation and relations between the two countries military and defense related matters, with particular reference to the fields specified in the Agreement and in other fields that may be agreed upon by the two countries national legislation, regulations and international obligations. The Agreement also cover the training of Sierra Leone personnel, provision of material, equipment, information and experience.

In a brief statement after the signing ceremony, Brig. Gen. (Rtd) Hassan Kellie Conteh told his Turkish counterparts that Sierra Leone is willing to learn from the expertise of Türkiye, in order to train the next generation of Officers of the Republic of Sierra Leone Armed Forces.

Sierra Leone’s first Ambassador Extraordinary and Plenipotentiary to the Republic of Türkiye, His Excellency Mohamed Hassan Kaisamba said the Signing of the Agreement was as a result of the strong and reliable relation he has concretized with Türkiye, saying that his country appreciated the many gains both sides have made for the benefit of their people.

“My country takes this relationship very seriously and would work with the Ministry of National Defense through my Defense Attaché, Colonel MM Hashim, who has worked very hard in the realization of this signing. Thank you very much.” Ambassador Kaisamba noted.